Today's poll summary will touch on the Ipsos Reid poll released on the weekend, the three Nanos polls released over the last three days, the regional results that were missing from the recent Forum Research poll, and two riding-level polls conducted by CROP. So let's get to it! 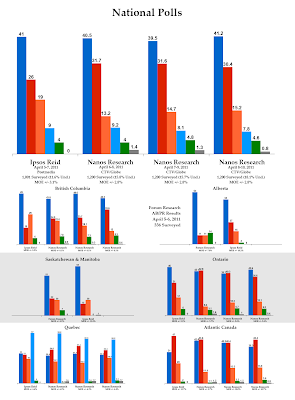 Generally speaking, there really hasn't been much change in these polls. The Nanos numbers are flickering up and down within the sampling margin of error, while Ipsos Reid has no real change to report since their last poll taken just before the election.

Obviously, the glaring difference between the national results for these polls is the level of support for the New Democrats. But the difference is just outside what you'd expect from the margin of error of these two polling firms, and the difference in methodology (Ipsos Reid prompts, Nanos doesn't) makes up for the rest. What these two polls do show, though, is relative stability.

But if we compare Nanos's polling results from today to their last complete three-day poll, conducted between April 5 and 7, there are a few changes worth noting at the regional level.

Most important is in Ontario, where the Conservatives have gained four points in those three days. The Liberals, meanwhile, have only gained one. The NDP and the Greens have both slipped to make room for the two parties. These aren't hugely significant shifts, but in other polls we have seen the Liberals look a little better in Ontario despite the Tories seeming to be able to outpace their opponents.

In Quebec, comparing the two Nanos polls tells us something we have seen from other firms: the Bloc is down and the NDP is up. Whether that will hold remains to be seen, but I've heard from another pollster that it appears the NDP is continuing to make some real headway in the province.

That brings us to the two riding polls released by CROP on Saturday for La Presse. I love riding polls - they allow me to see how my projection is doing and also give me the opportunity to fine tune the riding-level projections.

In general, though, both these riding polls were very close to what I was already projecting.

We'll start with Lac-Saint-Louis, where the Conservatives are trying to win a beachhead on the island of Montreal with Larry Smith.

So far, it appears the experiment is failing. We've seen poor polling numbers for the Conservatives in and around Montreal from EKOS, and CROP found the Tories to be running at only 26% in the riding, well behind Liberal incumbent Francis Scarpaleggia's result of 46%. Alain Ackad of the NDP is third with 12%, Bruno Tremblay of the Greens is fourth with 8%, and Éric Taillefer of the Bloc brings up the rear with 7%.

In Outremont, the scene of the epic battle between NDP incumbent Thomas Mulcair and former Liberal cabinet minister Martin Cauchon, the NDP has the edge. CROP found Mulcair to be at 47%, Cauchon at 27%, Bloc candidate Élise Daoust at 14%, Conservative Rodolphe Husny at 7%, and Green candidate Francois Pilon at 5%. Clearly, Mulcair is on the road to re-election.

Of course, this week is turning out to be a whole different ball game. We have the leaked report on G8 spending that is dominating the news and two debates that will be taking place in the next 54 hours. The Auditor General has made a statement poo-pooing some of the talk concerning the leaked report, but the damage might be already done. In the 2006 campaign, an investigation into the practices of Liberal MP Ralph Goodale, which turned out to be completely misplaced, was the nail in the coffin for the party.

If something similar happens here, by the week's end the polls could be showing something completely different than what we see today.

The questions asked by each of the pollsters are as follows: "For those parties you would consider voting federally, could you please rank your top two current local preferences?" (Nanos). "Thinking of how you feel right now, if FEDERAL elections were held tomorrow, which of the following parties' candidates would you, yourself, be most likely to support?" (Ipsos Reid). "If the federal election were held today, which party would you be most likely to vote for?" (Forum). Questions asked by CROP are not available.
Posted by Éric at 4:26:00 PM