The three national polls added to the projection this morning (Harris-Decima, EKOS, Nanos) have little original to say, though that in and of itself is something. The New Democrats are still in second, the Conservatives are still looking weak in front, and the Liberals are still looking like the old New Democrats. A few days remain, and it seems unlikely the polls will be showing anything other than this state of affairs over the weekend. 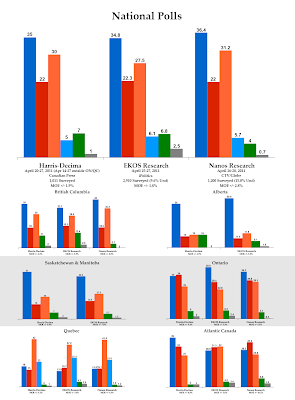 Where these three very similar polls differ most is of great importance. EKOS shows a large Conservative lead in Ontario that would likely result in a huge swathe of Tory seats. Nanos shows a closer race that would likely result in a similar landscape as in 2008. And then Harris-Decima puts the Liberals marginally ahead of the Conservatives, meaning the landscape in Ontario would be greatly changed.

How this all shakes out over the weekend and what emerges from it on Monday will decide the campaign. While Quebec will provide us with the most surprises and determine whether Jack Layton moves into Stornoway on Tuesday, Ontario will determine whether we have a minority or majority government. A minority means another election in two or three years and the possibility of either the New Democrats or Liberals forming a government after a Conservative defeat in the House of Commons. A majority means no election until October 2015, and by then all four parties could have different leaders or the polls could be showing something completely unthinkable today.

How will Ontarians vote? Will the Conservatives put up a big lead? Will they benefit from vote splitting? Will the Liberals show surprising strength? We don't know the answers to these questions, and we haven't had a single riding poll from Ontario during this five week campaign to help us answer them. But we have had riding polls for fully 1/3rd of all ridings in Quebec, thanks in part to a new blast from CROP and Cible Recherche. 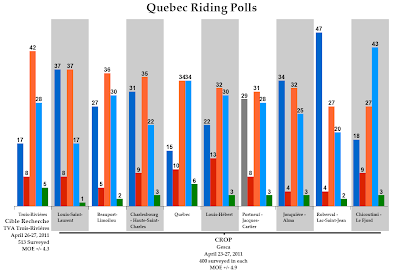 Ten - count 'em, ten - riding polls. And Cible Recherche put up another one today for Berthier - Maskinongé (which puts the Bloc ahead of the NDP by seven points). The first poll in this graph was conducted in Trois-Rivières, a Bloc riding ready to vote NDP despite only 24% of voters being able to name the NDP candidate (Robert Aubin). At 42%, that's a 33-point bump for the NDP.

Throughout the Quebec City region, CROP found the New Democrats to be extremely competitive. They are leading in Beauport - Limoilou, Charlesbourg - Haute-Saint-Charles, Louis-Hébert, and Portneuf - Jacques-Cartier, while being tied or closely trailing in Louis-Saint-Laurent and Québec. In other words, the NDP could sweep Quebec City, this after supporting ran in the 9% to 13% range in the 2008 election. The New Democrats could, depending on what happens elsewhere, block a Conservative majority in Quebec City of all places.

Moving over to the Saguenay-Lac-Saint-Jean, we see the NDP with a good degree of support but only challenging in Jonquière - Alma, where Claude Patry trails Jean-Pierre Blackburn by two points. While this riding did have a very inaccurate riding poll done for it in 2008, we've now seen two independent polls done for this riding showing that Blackburn is being hotly trailed.

This poll also shows that the Bloc is capable of holding on to some of its ridings. It is running neck-and-neck with the NDP in Louis-Hébert and Québec and has a good lead in Chicoutimi - Le Fjord. In close races like those in Quebec City, the Bloc's existing organization will be key, as will that of the Conservative Party. Polls published in the media like these may certainly demoralize the troops - but it could also galvanize them to get those votes out.

Note that Le Devoir will be publishing my seat projections tomorrow in a slightly different format. As I intend to post updates here on the site on Saturday and Sunday, with Sunday being my final projection, the newspaper will be publishing seat ranges for each of the parties in order not to have two sets of different numbers out in the ether. The Globe and Mail will be doing the same on Sunday, as those projections will be supplied to the newspaper tomorrow and so would have been different from my own projections here on ThreeHundredEight on Sunday. The ranges will give you a good idea of what the possible likely outcomes of Monday night could be, rather than the precise, riding-by-riding breakdown I will have for you on Sunday.
Posted by Éric at 5:27:00 PM