Three new national polls from EKOS, Nanos, and Forum have been added to the model, along with five new riding polls conducted in Quebec. The result is another gain for the New Democrats, mostly at the expense of the Conservative Party.

The Conservatives are now down 0.3 points to 36.9% nationally, and have dropped three seats to only 143. That is where they stood when the election began, but in practice it is even lower as two safe Conservative seats were vacant at the dissolution of the House of Commons.

The Bloc Québécois is down to 7.5% nationally but is steady at 43 seats, a number they will not hold on to for many more days. The Greens are unchanged at 6%.

The problems facing the Conservatives are clear in the regional breakdown. While they are holding steady in the two westernmost provinces, they are down big in the Prairies and Atlantic Canada, and are losing ground in Ontario and Quebec.

The Liberals are also in trouble, with big drops in Quebec, Ontario, and British Columbia. They are holding steady in Atlantic Canada but that is little consolation. The party would be losing many seats in Ontario if the Conservatives weren't on the decline in the province as well.

For the Bloc, they are down again to 31.4% and will continue to drop like a stone. They are reaching the point in the projection where they will begin to lose seats in bunches, primarily to the NDP.

The New Democrats, meanwhile, continue to gain everywhere, up about a point in every part of the country except British Columbia. They made another giant leap forward in Quebec and are now trailing the Bloc by only four points.

Six seats changed hands, all in Quebec and Atlantic Canada.

The New Democrats picked up Brossard - La Prairie and Saint-Lambert in Quebec, the first from the Liberals and the second from the Bloc. Hoang Mai and Sadia Groguhé are now the respective favourites.

The Bloc has retaken Haute-Gaspésie - La Mitis - Matane - Matapédia from the Liberals, thanks in large part to a riding poll added to the model which had Jean-François Fortin of the Bloc in the lead.

The Liberals have also regained a seat themsevles, taking Random - Burin - St. George's back from the Tories in Newfoundland & Labrador.

The New Democrats are still moving forward in the projection and will undoubtedly take second spot in the popular vote projecton before May 2nd. Seats in which the NDP trails by five points or less in the projection include:

If the NDP took all of these seats they would have 59 in the projection. All else being equal, the Conservatives would be reduced to 139, the Liberals to 70, and the Bloc Québécois to 39.

Note that of the 11 ridings listed as being within five points for the New Democrats yesterday, the NDP captured four of them, and another five were added to the list today. 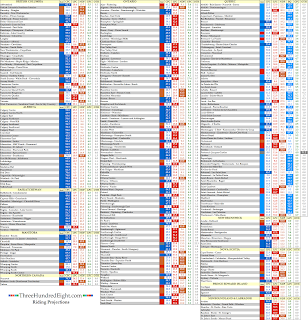