Conservatives back to a minority

Before getting to this morning's projection, a word on my update schedule. Today's update is being done later than usual, and much later than I had hoped I would be able to do when the campaign had started. I was aiming for updates before 8:00 AM, but that was before Nanos's reporting schedule became known. I want to include the most recent polls in my update, which means I am only starting on the projection update after 7:00 AM each morning. On certain days, like today with EKOS reporting shortly after 8:00 AM, that pushes my update back past 9:00 AM. I will try to keep the updates coming as early as possible each day, but it is difficult to keep to a consistent schedule.

But this morning's update may be worth the wait, because we have a few noteworthy changes taking place. Most importantly, the Conservatives have moved back into minority territory, thanks to new polls from the researchers: EKOS, Nanos, and Forum.

The Conservatives remain stable at 38.6% nationally, a level of support they have maintained for days. But they have dropped two seats and are now projected to win 153 - two short of a majority. The Liberals, on the other hand, are up 0.2 points to 27.8% and one seat to 72.

Aside from a 0.9-point gain in British Columbia, the Conservatives have remained stable throughout the country.

The Liberals, on the other hand, have dropped 0.5 points in British Columbia but have gained that amount in Ontario - a significant jump. They are also up 1.1 points in Atlantic Canada, closing the gap on the Tories.

The NDP is up in Alberta, the Prairies, and Quebec, but down in Ontario and Atlantic Canada. A mixed bag.

The Bloc is down again in Quebec by 0.3 points. They are now projected to have 37.5% support.

The two seat changes have taken place in Manitoba and Ontario. The riding of Elmwood - Transcona has transferred back to the NDP from the Conservatives in the projection, and incumbent Jim Maloway is favoured again. In Ontario, Kingston and the Islands has moved back into the Liberal fold from the Conservatives. New candidate Ted Hsu is projected to win the riding for the Liberals after the retirement of Speaker Peter Milliken.

With the Liberal gain in Ontario, a few ridings are getting close to flipping to their side. We shall see where the weekend takes us, and you can read tomorrow's projection in Le Devoir and Sunday's on The Globe and Mail's website. 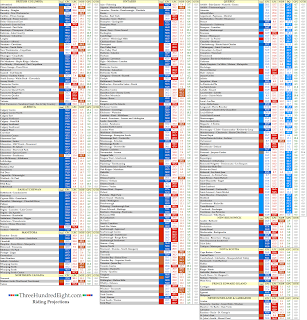