With the long Easter weekend intervening in the election campaign, few polls have been released in the past few days. Nanos reported yesterday on a three-day roll up that excluded Friday, and they did the same today. But they won't be reporting tomorrow, as their pollsters have the day off today. Accordingly, the projection hasn't moved around much. But every polling firm should report at least once this week, so it will be a roller coaster ride.

The Conservatives gained in two key regions: half-a-point in Ontario and almost a full point in Atlantic Canada. They are now actually in the lead (by the slimmest of margins) on the East Coast.

For the Liberals, they lost in Ontario and Atlantic Canada but did make decent gains in British Columbia and Quebec. Speaking of which, Michael Ignatieff was on Tout le monde en parle last night and did well enough. He was most helped out by Dominique Michel, a well-known celebrity in Quebec (so well-known, in fact, that she and not Ignatieff was the first guest), who endorsed the Liberal leader as he was sitting right next to her. Had she said instead that she was supporting the Bloc or the NDP, it would have been devastating.

The New Democrats were stable but made another big gain in Quebec. They're now at 20.7% there and a few seats are on the tipping point, Jeanne-Le Ber in particular.

The pain continues for the Bloc, down 0.3 points to only 34.1%. They're being dragged down with every passing day and every new poll.

The one seat that changed hands was in Newfoundland & Labrador. Conservative candidate John Ottenheimer is now the projected winner in Random - Burin - St. George's over Liberal incumbent Judy Foote. Ottenheimer is a former provincial cabinet minister who retired from provincial politics in 2007.

A few other Atlantic Canadian seats are on the bubble. The gap is less than five points in the projection in Moncton - Riverview - Dieppe (Liberals lead, Conservatives trail), Saint John (CPC lead, LPC trail), West Nova (CPC lead, LPC trail), and Egmont (CPC lead, LPC trail). But if the Conservatives continue to gain while the Liberals lose, seats like Madawaska - Restigouche, Malpeque, and St. John's South - Mount Pearl could turn blue - enough to push the Tories to 154 seats in all. For the New Democrats, they might have a shot in St. John's South - Mount Pearl, South Shore - St. Margaret's, and Dartmouth - Cole Harbour. One of those seats is held by the Tories, and the first is a three-way race. So in some individual ridings out east the NDP can play a role in defeating Conservatives, along with Liberals.

Check back later today for a look at the Nanos poll and two riding polls released over the weekend in Quebec. 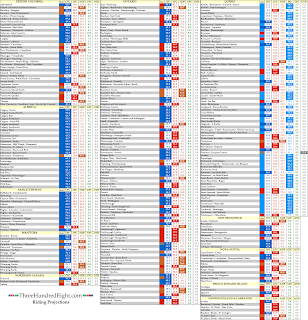