Two new polls in the model, one from Nanos Research and the other from the Innovative Research Group, do very little to shift the projection. In fact, at the national level, there have been virtually no changes at all.

The Conservatives continue to lead with 38.6% and are projected to win 154 seats, unchanged from yesterday. The Liberals remain at 27.6% and 71 seats, while the New Democrats are also unchanged at 16.8% and 32 seats.

Regionally, things are pretty static. The biggest set of changes has come in British Columbia, where the Conservatives have dropped 0.4 points to 40.3%, followed by the Liberals at 24.2% and the NDP at 23.4%.

In Ontario, the gap has widened by another 0.3 points as the Liberals drop 0.2 and the Conservatives gain 0.1.

In Atlantic Canada, the Liberals have made another gain and now stand at 36.6%, within one point of the Tories.

There have been no seat changes since yesterday.

The two new polls this morning have a few little interesting tidbits in them, however, so check back soon for the daily poll summary. 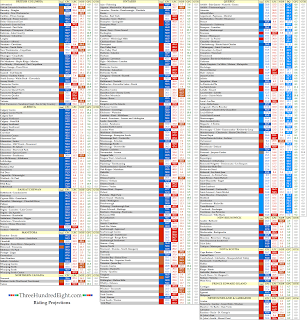