Nanos poll and a Quebec retrospective

Today's Nanos poll - which had little remarkable in it - has been somewhat drowned out with the buzz surrounding the newest polls from EKOS and Forum Research. As regular readers should know by now, I'll only be dealing today with the newest polls added to the projection this morning. The only other new poll added in addition to Nanos's was one by the Mustel Group, a BC-based outfit. 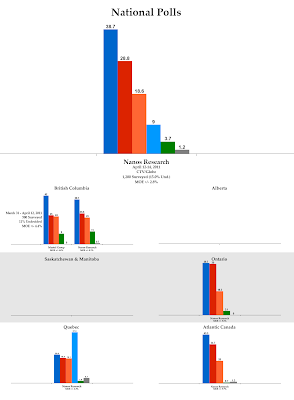 This Nanos poll is relatively consistent with the one released three days ago, and there has been little real change worth noting since yesterday. It does seem to be the case that the New Democrats have recovered and are back to their 2008 level of support. But they are still below their performance in that election in the West, in Ontario, and in Atlantic Canada. Quebec is the main source of their growth, and it seems unlikely that the NDP will be able to turn that growth into more than an extra seat or two.

But in this Nanos poll there does seem to be some movement going on in British Columbia. For the last three days the Conservatives have dropped, while the Liberals have been dropping for four consecutive days. The NDP, on the other hand, is up for the fourth straight day in the province. They now stand at 23%. This gain is balanced out a little by three consecutive days of loss in the Prairies.

Mustel Group does seem to concur that the New Democrats are improving in British Columbia. They have them at 24% support, though this particular poll was taken over two weeks. Mustel says the Conservatives are performing best in the metropolitan region around Vancouver and in the BC Interior, while the Liberals are doing best in Vancouver itself. The NDP are also performing well in Vancouver and on Vancouver Island, while Victoria and the area around it is setting up to be a close race for all parties involved.

A quick word about the two newer polls by EKOS and Forum: they both show big NDP gains in Quebec at the expense of the Bloc Québécois. In fact, the Bloc is at historic-lows in these polls. But most observers, including yours truly, had thought that Gilles Duceppe had solidified his own support with his performance in the French-language debate on Wednesday. Were we wrong, or is today's Nanos poll, which pegs the Bloc at 37.3%, on the money? Time will tell.

In the meantime, let's look at how the vote has evolved in Quebec since the beginning of the campaign. Here is the daily tracking chart for Quebec, showing the average results for all pollsters. It has been updated to include today's Nanos poll. 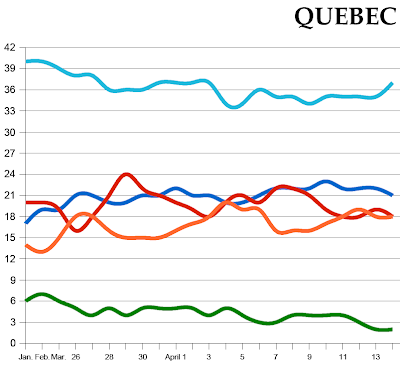 The split between the three federalist parties is starkly apparent here. They have all been polling between 15% and 25% since the campaign began, and have been neck-and-neck for most of it. The Conservatives have been holding steady while the Liberals have fluctuated greatly, rising as high as 24% at the end of March and sinking as low as 18% a few days later. The NDP has been growing, with some peaks and valleys, but when you compare their current results to their montly averages in January, February, and March, you see how far they have come.

The Bloc has been on a slow decline, going from 39% at the beginning of the campaign to lower than 36% since about April 3rd. They've been holding at roughly 35% since then, though the most recent polls would argue even that is too high. If not for the three-way split below the Bloc, the party would be in serious trouble of losing a lot of seats.

To the left is a chart that includes all polls that have been released for Quebec since the campaign began. You can click on it to enlarge it.

Quebec is turning out to be a much more interesting political battle than many would have thought at the start of the campaign. And the storyline is very different from what everyone expected. The Conservatives are doing well enough and the battle isn't necessarily between the Tories and the Bloc. The Liberals need to find some life while the NDP will shake things up significantly. How will their new vote break? Will they win more than one seat? What effect will they have on the other close races? The province will be one to watch on May 2.

The Nanos and Mustel polls surveyed eligible Canadian voters. The questions asked by each of the pollsters are as follows: "For those parties you would consider voting federally, could you please rank your top two current local preferences?" (Nanos). The question asked by Mustel was not available.
Posted by Éric at 4:46:00 PM