So I heard some polls came out today

Two contradictory polls made a splash today, one by EKOS and the other by COMPAS. A lot of Twitter ink has been spilled over these polls, as COMPAS shows a 21-point gap and EKOS a gap of only five points. But my daily poll summaries cover the polls that have been newly added to the projection. As both EKOS and COMPAS came out late this morning, they were not added to the projection. I will cover them in detail tomorrow.

But I will say a few things now. We're all very familiar with EKOS. They have a good track record, being one of the top five pollsters in my ranking of 24 Canadian firms, and they have been active in this campaign. We can use the polls they have already released in this campaign to take a look at trends and see where the parties are going. COMPAS, on the other hand, does not conduct regular voting intentions polls. In fact, since 2003 I only have records of them being active in two election campaigns within four weeks of election day, and the last one was in the 2005 Alberta provincial election.

The biggest problem is that we have nothing to compare this COMPAS poll to, and are thus unable to identify any trends. If they report again in this campaign and peg the Conservatives at 41% instead of 45%, while other pollsters also show a Tory drop, then we'll have something to chew on. But without something to compare their results to, and with them coming to a very different conclusion than what other pollsters have found, the usefulness of this poll is very limited.

Nanos, on the other hand, continues to be useful. And I'll also take this opportunity to look at how the polls have been moving in battleground Ontario since the beginning of the campaign. 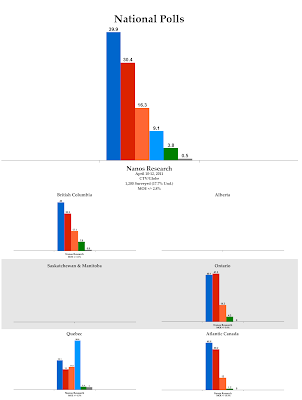 In this poll of eligible Canadian voters conducted for CTV and The Globe and Mail, Nanos finds that not much has changed. The firm did report a Conservative drop for Monday, perhaps a result of the leaked G8 report, but the numbers seem to have held firm since then. They continue to lead with 39.9%, ahead of the Liberals to 30.4%. No statistically significant shifts have occured, and since Nanos's last complete three-day poll ending on April 9 the changes have been infinitessimal.

It's the same thing at the regional level, though a swap of support between the Liberals and the Bloc Québécois is of some interest. In Quebec, the Bloc has gained 5.5 points since yesterday and now leads with 38.6%. That is the best result in any Nanos poll for the Bloc during this campaign - could this be the Tout le monde en parle effect? Gilles Duceppe was on the show on Sunday night, though I thought his performance was only average.

The Liberals, meanwhile, have dropped 4.8 points to 16%, behind both the Tories and the NDP. Not even these shifts are truly statistically significant, but they could be the start of a trend that could be worth watching. Indeed, the Liberals have dropped for three consecutive days in Quebec in Nanos's daily tracking.

The party is on the upswing in Ontario, however, and that might be the story of the campaign so far.

In that province, Nanos puts the Liberals at 41.3% to the Conservatives' 40.1%. And if we look at the daily polling averages tracking chart for Ontario (updated below to include today's Nanos), we can see that the race has been truly getting tighter in the battleground province. 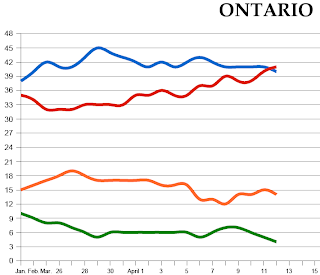 The Liberals, on the other hand, have been steadily gaining to the point where they have overtaken the Conservatives today. Granted, adding COMPAS's poll will probably push the Tory numbers up, but EKOS found the race in Ontario be close as well, so we should expect this trend to continue in the chart.

The New Democrats have suffered the most at the hands of the Liberals, dropping from around 17% from March 29th to April 3rd down to around 13%. They've since recovered a little, but are far from the high of 19-20% they had in the first days of the campaign. They're now at around 15% in Ontario, giving the Liberals the ability to close in on the Tories. The Greens have also made more room for the frontrunners.

It is difficult to estimate where this NDP support sits geographically. I would speculate that the New Democrats are dropping in ridings where they don't stand a good chance of being elected as the anti-Harper vote coalesces around the Liberals. I have no doubt, though, that most NDP incumbents have a very good chance of holding on to most of their support.

To the left is a chart of all of the Ontario polls that have been released since the beginning of the campaign. Unlike the chart at the bottom of the page, they are in order of release. So, you can take a look at how the polls have been moving. You can see immediately how the Liberals have moved from the low-30s to the high-30s since the campaign began.

You can click on the chart to enlarge it.

Time permitting, I hope to add these regional/provincial analyses to my daily poll summaries. I'll take a look at Quebec next, and be sure to check back here tomorrow to see how the new EKOS, COMPAS, and Nanos polls shift the projection.

The questions asked by each of the pollsters are as follows: "For those parties you would consider voting federally, could you please rank your top two current local preferences?" (Nanos).
Posted by Éric at 2:39:00 PM