Four national polls (EKOS, Angus-Reid, Nanos, Ipsos-Reid) were added to the projection this morning. Unfortunately, I didn't get the details of the newest Léger poll before I ran the numbers so it will have to be included in tomorrow's final update, which should also include the latest numbers from at least three other new polls that will be released between now and then.

The Conservative slide in national support has stopped, and they are up 0.1 point to 36.8% in the projection. They are unchanged at 144 seats.

The New Democrats have gained 1.3 points nationally and have moved into second with 25.1% support. They are also up six seats to 59, which still places them in third.

The Liberals are down 0.9 points to 24.1% and five seats to 65, while the Bloc Québécois is down to 7.1% nationally. They are also down one seat to 40 in Quebec. Unless the final polls added to the projection are radically different, we can expect the Bloc to drop below 40 seats tomorrow.

Regionally, the Conservatives made big gains in Alberta and the Prairies, and finally stopped dropping in Ontario. They are down in Quebec and Atlantic Canada, however.

The New Democrats are still making big gains in the projection, with increases between 1.1 and 2.4 points in British Columbia, Ontario, Quebec, and Atlantic Canada. At 31%, they've moved comfortably ahead in Quebec and are even starting to challenge the Tories and Liberals in Atlantic Canada.

The Liberals are down everywhere, dropping about a point in British Columbia, the Prairies, Ontario, and Atlantic Canada, while the Bloc is down slightly in Quebec to 29.8%.

Eight seats have changed hands in the projection.

In British Columbia, Conservative candidate Troy DeSouza is now projected to take Esquimalt - Juan de Fuca from the Liberals, while the NDP's Ronna-Rae Leonard is now the projected winner in Vancouver Island North, a Conservative riding.

In Ontario, Alicia Gordon of the Conservatives is now favoured in Kingston and the Islands.

And in Atlantic Canada, Ryan Cleary of the New Democrats is now the projected winner in St. John's South - Mount Pearl.

The final week's ceilings will be posted later this afternoon, with the final projection being posted tomorrow late in the day in order to capture every last poll. 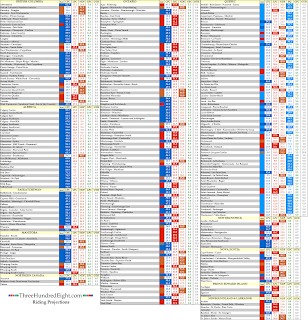