The Conservative ceiling in this past third week of the campaign has risen to a very comfortable level for Stephen Harper. The Liberal ceiling, on the other, has dropped by 16 seats.

The Conservative ceiling is based on receiving roughly 46% of the vote in Canada. This number combines the best regional polling results for the Tories this week: 49% in British Columbia, 70% in Alberta, 59% in the Prairies, 49% in Ontario, 25% in Quebec, and 49% in Atlantic Canada.

With these levels of support, the Conservatives would likely win 25 seats in British Columbia, 28 in Alberta, 25 in the Prairies, 68 in Ontario, 12 in Quebec, and 19 in Atlantic Canada for a total of 178. That's well into majority territory, and in fact this scenario puts the Liberals only two seats ahead of the Bloc Québécois, 54 to 52.

This scenario isn't, however, extraordinarily plausible. While the results out West and in Quebec are not very unusual, a 17-point lead in Ontario is, and it is difficult to see the Conservatives reaching almost 50% in Atlantic Canada. But these levels of support do not put the Conservatives ahead in a lot of long-shot ridings, instead they limit the opposition to their fortresses. That is not such an unlikely scenario. This would give the Liberals 11 seats in British Columbia, none in Alberta, three in the Prairies, 45 in Ontario, 21 in Quebec, and 20 in Atlantic Canada for a total of 101. But the Conservatives would still win 135 seats, and the combined totals of the Liberals and NDP would still be four short of the Tories - five if we include André Arthur.

This scenario also counts on a few stretches: the NDP vote needs to collapse in British Columbia and Atlantic Canada, while the Bloc needs to drop to a historic low in Quebec. The results in the three Prairie provinces, Atlantic Canada, and Ontario are not unthinkable, and in fact don't even vary all that much from what some of the pollsters have been reporting on a regular basis. 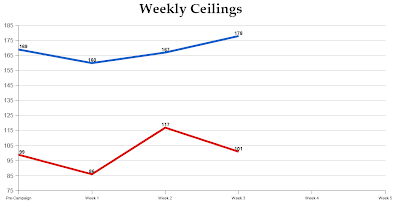 If we look at how the weekly ceilings have changed since March, we can see that the Conservatives have been increasing their range - though not drastically. The ceiling has varied from 160 to 178 seats since March, a relatively minor variation that can be chalked up to the statistical wobbling of the polls. What is notable is that their upper ceiling has remained over 155 seats, which is not where I had their ceiling for much of 2010.

The Liberals, on the other hand, have varied a bit more, from a low of 86 in the first week of the campaign to a high of 117 seats last week. None of these ceilings have put the Liberals ahead of the Conservatives, which is where they need to be. They all, however, show that there is some room for relatively significant growth for the Liberals.

If you haven't seen them already, be sure to check Le Devoir for today's updated seat and vote projections. These do not include the poll released by Nanos this morning, though tomorrow's vote and seat projections that will be featured on The Globe and Mail's website will.
Posted by Éric at 3:52:00 PM