It's a bit late on a Friday to get into details, but the three polls out today by Nanos, EKOS, and Forum Research generally continue the trend of topline stability. The campaign, from a polling perspective and perhaps even from a policy perspective, has been a snorer so far. The leaders need to spice it up at the debate. I'm thinking we release bees on them as they explain their foreign policy objectives. 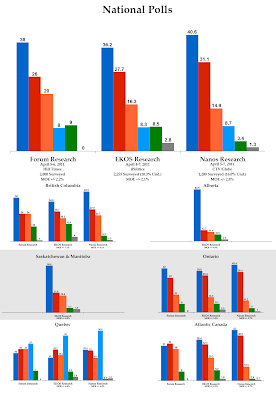 But until then, let's take a look at these three polls. EKOS and Nanos took them over similar days (EKOS going back one more than Nanos), while Forum conducted its poll over two days, overlapping with both EKOS and Nanos. So these are generally similar polling dates.

What is interesting is that the two polls that agree with one another the most were both conducted with an IVR system - EKOS and Forum. The real point of contention between the two seems to be the NDP, which has been difficult to peg in this campaign. We've seen them oscillate between 14% and 21% from the beginning.

The biggest difference in the Nanos poll is the Green result, which influences the other results by quite a bit considering five points are up for grabs that aren't in the Forum and EKOS polls. The reason for this is simple: Nanos doesn't prompt the Green Party (or any party, for that matter) while the other two do. But will the Greens end up closer to 3% or 9%? The answer, I believe, is somewhere in between.

What is most remarkable to me in the Ontario results is the weakness of the NDP. They were at 18% in 2008 in the province, but in these polls (and in most polls so far in this campaign) that looks like a dream. Have the New Democrats actually sunk so low in Ontario?

And for those keeping score, EKOS still has the Liberals ahead of the Tories in and around Toronto (42.6% to 37.6%) and Ottawa (49% to 37.3%). Interestingly, the Conservatives are down to 10.3% in Montreal. The Larry Smith experiment, it seems, might not be working.

Forum's Bloc result in Quebec is an odd one, similar to the result EKOS had earlier this week. Undoubtedly, the Bloc's vote isn't as solid as one might have thought coming into the campaign, but I still doubt that the Bloc could sink below 30%. They've never been that low before, and the provincial Parti Québécois has only twice been below 30%: in 1970 (their first election) and in 2007, when André Boisclair and the nationalist ADQ of Mario Dumont disrupted the generally reliable sovereigntist vote. Even then, the party still managed 28%.

What is consistent in all three of these polls, however, is the Liberal Party at around 22%. Gone are the days of the low-teens we saw at the beginning of the campaign.

In Atlantic Canada, the two main parties are jockeying for top spot. That has been a constant for some time. The NDP is still looking weak, and Nanos has had them sinking for five consecutive days.

Next week should be a big one, as I expect the debates will shake things up a little bit. Which way it goes is up in the air. What we do know, though, is that I'll be posting the Week 2 ceilings for the Conservatives and Liberals at some point during the weekend.

The questions asked by each of the pollsters are as follows: "For those parties you would consider voting federally, could you please rank your top two current local preferences?" (Nanos). "If a federal election were held tomorrow, which party would you vote for?" (EKOS). No details on the question asked by Forum Research are available at time of posting.
Posted by Éric at 4:56:00 PM