It was a whirlwind 24 hours, but the Liberals are now back to 73 seats after this morning's Nanos poll brings them back down to earth. As that poll is just replacing yesterday's in the projection, and a new Mustel poll for British Columbia does not shift things much out west, there is little real change in the projection. But the two close ridings the Liberals took back yesterday have slipped just out of their fingers again.

The Conservatives have picked up 0.1 points in the projection are are now at 39%. They have been between 38.6% and 39% since March 29th, demonstrating just how little the numbers have moved in this campaign. They also pick up one seat and are back to 152.

The Liberals are unchanged at 28.2%, but small drops in Ontario and Quebec mean they are down to 73 seats.

We are supposed to hear from EKOS today, so look for tomorrow's projection in Le Devoir to see what effect it has on the numbers.

Since there wasn't much new to add to the projection, it has changed very little.

In Quebec, the Conservatives and Liberals have dropped a little to the benefit of the Bloc Québécois, up 0.2 points to 36.9%. This is due to the 37.3% result from Nanos today.

And in Ontario, the Conservatives have widened the gap again by 0.3 points.

The seats lost by the Liberals are the ones they gained yesterday: Brampton - Springdale and Brossard - La Prairie. Parm Gill (Conservative) and Marcel Lussier (Bloc Québécois) are now favoured in those ridings.

This week I've been focusing on the Ontario ridings which could go from the Conservatives to the Liberals. But now that the trend has been reversed, at least for today, let's look at the ridings liable to swap in this province and others, based on which parties are gaining and losing.

In British Columbia, the Conservatives have dropped a little while the Greens have gained a little. The only riding where the two parties are going head-to-head is Saanich - Gulf Islands. However, I still have the Tories 10.2 points ahead in the riding.

In Ontario, the Conservatives are within three points of the Liberals in Brampton West (0.5 point gap), Kingston and the Islands (1.2), and Eglinton - Lawrence (2.7), and Mississauga South (2.7). There is, actually, little room for Tory growth at the expense of the Liberals in the province, though a gain of four seats would put the Tories at 156.

In Quebec, where the Bloc has now gained while the Liberals and Tories have dropped, Gilles Duceppe's party is within three points of their opponents in Beauport - Limoilou (Conservative, 1.7 point gap), Papineau (Liberal, 2.2), and Montmagny - L'Islet - Kamouraska - Rivière-du-Loup (Conservative, 2.3).

And in Atlantic Canada, where the NDP is making headway at the expense of the Conservatives (at least, numbers-wise. The Tory vote could be going to the Liberals and some Liberal vote could be going to the NDP, or some other combination of these shifts from one party to another), there is very little prospect of seat gains for Jack Layton. The NDP is within 13.4 points of the Tories in South Shore - St. Margaret's (Nova Scotia) in the projection, while St. John's South - Mount Pearl in Newfoundland & Labrador is a close three-way race. 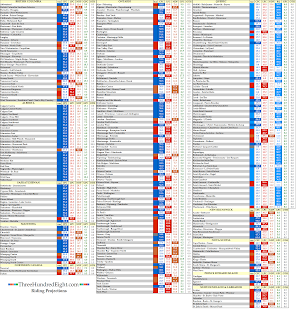