And now double-digit leads for no one

Yesterday, the daily poll summary showed double-digit leads from EKOS Research, Nanos Research, and Léger Marketing. Now, with new polls from Nanos and Harris-Decima, that lead stands at between 7 and 9.6 points. What happened? 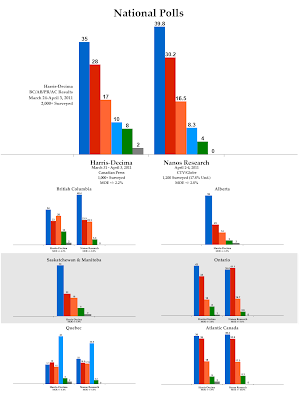 Both Harris-Decima and Nanos are showing the same trend, that of a narrowing gap between the Conservatives and the Liberals. Compared to Harris-Decima's last poll taken between March 24 and March 27, just before the campaign began, the Conservatives have dropped three points while the Liberals have gained four. That has turned what was a 14-point lead into a seven point lead.

For Nanos, if we compare this three-day rolling poll to the last completely different three-day rolling poll (March 30-April 1), we also see the gap narrowing. However, it isn't as stark. In that last rolling poll Nanos had the two parties at 41.3% and 30.3%, a gap of 11 points. Three days later, the two parties are at 39.8% and 30.2%, a gap of 9.6 points. Whereas Harris-Decima's variations are significant, Nanos could just be wobbling within the sampling margin of error. But a consistent trend over two pollsters is something to note.

The two pollsters disagree in Ontario, on the other hand. Harris-Decima has the gap widening by three points, with the Conservatives gaining five and the Liberals gaining two. In the Nanos poll, we have the Conservatives dropping five and the Liberals gaining almost seven points. This means that Nanos has gone from a 10.5-point Conservative lead to a 1.5-point Liberal lead. That is a huge shift, one not borne out by the other pollsters, so we should wait and see whether this is just a "blip", as The Globe and Mail put it.

But if I input these Nanos numbers into the model for Ontario only, I get 46 seats for the Conservatives, 49 for the Liberals, and 11 for the NDP. It's not enough to put Michael Ignatieff in 24 Sussex, but it is part of the equation.

In Quebec, both pollsters have the Bloc relatively stable and the Conservatives dropping by five points. But in Nanos that means a healthy 26.7% turning into a still-decent 22%, whereas in Harris-Decima the party has gone from 22% to 17%. That both pollsters find the Tories dropping in Quebec is noteworthy, and they also both put the Liberals at roughly 19% in the province.

One of things I was looking for in Nanos's Quebec numbers was whether the NDP would get a bump because of Jack Layton's appearance on Tout le monde en parle. As the show airs relatively late on Sundays, any bump would not have been recorded in yesterday's poll.

But it would be recorded in today's tracking poll, and lo and behold the NDP is up one point to 17.9% in Quebec. Of course, that could be the MOE at play, but I will be watching the NDP's Quebec numbers closely over the next two days. If there is a noticeable bump, it will be something to watch for when Gilles Duceppe, Michael Ignatieff and (maybe?) Stephen Harper make their inevitable appearances.

By the by, comparing the NDP's numbers in Nanos's last three-day poll in Quebec to the one out today shows the NDP up almost five points in the province. Harris-Decima has the party up one point.

Elsewhere, we can note the similar results in Atlantic Canada in these two polls. A close race, and the NDP is not where they have historically been. British Columbia is more of a wash, though. It has been one of the provinces most difficult to get consistent results from of late. Volatility, or coincidence?

Harris-Decima also had some leadership questions in their survey. The most interesting result is that Michael Ignatieff's favourability rating has gone from 25% to 37% since February. He still lags behind Harper (45% favourable to 52% unfavourable), but has a similar unfavourability rating: 54%. Not surprisingly, Duceppe is very well liked in Quebec while Layton is still the most popular leader in Canada (63% favourable).

A general overview of the polling numbers and the campaign up to this point tells me that the Liberals are poised to make some gains. Ignatieff's numbers are improving and the party has gotten some half-decent polling results as well. Yet the Conservatives are still very strong, and the polls aren't moving as much as you might expect. My own projection puts them at a virtual majority.

The questions asked by each of the pollsters are as follows: "For those parties you would consider voting federally, could you please rank your top two current local preferences?" (Nanos). "If a federal election were being held tomorrow, who do you think you would be voting for in your area?" (Harris-Decima)
Posted by Éric at 2:45:00 PM