Liberal and Conservative ceilings after Week 1

After the first week of campaigning, it seems that the Conservatives are capable of topping out at more than the 155 seats needed to get a majority government.  But the wiggle room the party has is miniscule.

Every weekend, I am going to calculate what the Liberal and Conservative ceilings were during the preceding week. The ceilings are established similarly to how I calculate the best and worst case scenarios: I take the best regional results for each party from all of the polls released during the week, and run seat projections with those results. The only difference is that I am taking the highest poll result, rather than the result that delivers the most seats. This puts the onus on the parties themselves, rather than on the strength or weakness of other parties. It is also more manageable from my end.

Of course, these calculations are greatly influenced by the smaller samples of regional polls. But we can still draw some useful information from these ceilings, as it is unlikely that the parties are capable of outpacing the best polls when you consider that the best polls are likely a few points higher than reality thanks to the MOE.

It would also hand them 160 seats, five more than are needed for a majority. Their ceilings for the first week are 24 seats in British Columbia, 27 in Alberta, 22 in the Prairies, 63 in Ontario, 12 in Quebec, and 11 in Atlantic Canada, based only on the best poll results. As the Conservatives are currently riding higher in the campaign projection in Atlantic Canada, this is an indication of how the polls have not been great for the Tories out east in this last week. Their numbers have been good, but the Liberals have been doing better. With their support for the Lower Churchill projection, however, I expect the Tories to gain. 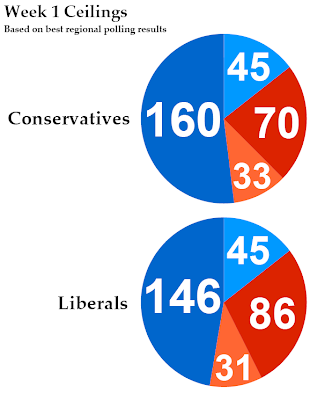 For the Liberals, the week has given them some reason to dare to hope that things may turn in their favour, but they still have been struggling and trailing the Conservatives by a significant margin. Their best poll results were 32.3% in British Columbia, 21% in Alberta, 33% in the Prairies, 34.5% in Ontario, 26.5% in Quebec, and 47.9% in Atlantic Canada. Nationally, that would give them 32% support.

Their best seat results are seven in British Columbia, one in Alberta, six in the Prairies, 30 in Ontario, 18 in Quebec, and 23 in Atlantic Canada. This would give them 86 seats in all, a gain of nine over their standings when the government fell and the election was called.

It's a modest gain, but the Conservatives would also make a modest gain of their own. That the best the Liberals can do in Ontario is 30 seats shows the real problem of the first week for Michael Ignatieff: the Conservatives are doing extraordinarily well in Ontario. The Liberals need to whittle that lead down if they want to have any hope of winning more than 90 seats. If they want to form the next government, it is absolutely essential that the tide turns in Ontario.

I have not calculated the ceilings for the New Democrats or the Bloc Québécois for two reasons. Firstly, it takes time to run these calculations through the model. Secondly, the first party is unlikely to form government and the second party definitely will not. And the fate of the NDP depends heavily on the Liberals, as their best chance of influencing government policy is if the Liberals can win enough seats to take the reins of power from the Tories.

The ceilings of the Conservatives and Liberals are thus very important. On the one hand, it gives us an idea of the likelihood of a Conservative majority. On the other hand, it lets us know whether the Liberals really do have a shot of forming the next government or not. At this point, the answer to the last question is no.
Posted by Éric at 4:45:00 PM