With only today's Nanos poll to add to the projection, there hasn't been much change. In fact, there has been virtually no change at the national level. But a few new seats are getting close to the tipping point.

Regionally there have been a few more changes. The Conservatives were stable in most parts of the country, but also gained 1.1 points in the Prairies. They are now at 51.7% in Saskatchewan and Manitoba, better than their 2008 performance.

The Liberals dropped 0.3 points at both ends of the country, but continued their slow, incremental progression in Ontario. They now stand at 35.5% there.

The New Democrats had more movement, with gains of 0.3 points in British Columbia and Alberta, and gains of 0.2 points and 0.7 points in Ontario and Atlantic Canada, respectively.

None of this has resulted in any seat changes, however. But a few seats that have not changed hands so far in the campaign in the projection are getting close.

The New Democrats, meanwhile, are within one point of the leading party in one riding: Vancouver - Kingsway (35.2% Liberal to 34.4% NDP).

But things are still fluid, as the Conservatives are also still very close in some of the ridings that have recently switched over, like Brampton - Springdale, Kitchener - Waterloo, and Sault Ste. Marie. Depending on how the polls move in the next few days, we could see the Tories back over 150 or below 143, the amount of seats they held when the election was called.

On an unrelated topic, ThreeHundredEight.com's newest sponsor, 270soft, designs election simulation computer games. They've recently released their version for the 2011 Canadian election. It looks like a lot of fun, and I've been reliably informed that some of their older titles were great. So, I invite you to check them out. 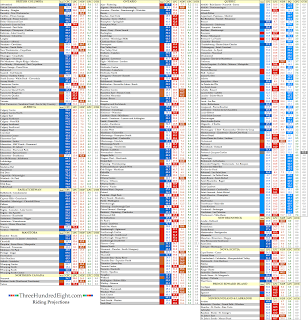