Four new polls this morning. Four! In 2008 this would have been nothing special, but in 2011 this is a deluge. However, new polls don't always mean new changes, and this set of polls has had little effect on the projection. But we do have a few seat swaps, and the end result is a Conservative majority government. But only just.

The four polls added this morning are from EKOS Research, Nanos Research, Angus-Reid (at least what could be culled from incomplete media reports), and Environics. That last poll was provided to me personally, and a release should be up on their site soon.

Regionally, the Conservatives made some good gains in Alberta and the Prairies, regions where they are already mostly maxed out. They dropped in British Columbia and Quebec, and were relatively stable in Ontario and Atlantic Canada.

The Liberals jumped in British Columbia and re-took second place in Quebec from the Tories, but dropped by a significant amount in Alberta and Atlantic Canada.

The New Democrats were relatively stable, except in Quebec where they gained a full point. That's big in the projection. They've never been this high in the province before. The gain came mostly at the expense of the Bloc, which dropped a point to 37.8%, below their 2008 level of support. But the NDP is not yet projected to win more than one seat in the province.

The two seat changes took place in Ontario and Quebec. The Conservatives have edged ahead in Kingston and the Islands in the projection, and now Alicia Gordon is favoured over Liberal candidate Ted Hsu. In Quebec, the Liberals and their somewhat obscure MP Justin Trudeau are in front again in the riding of Papineau.

Though the Conservatives have been picking up a seat or two each day lately, I'm getting the impression they are currently riding the top of a wave. While it could, of course, go either way, I would not be surprised if this is as high as the Tories get in my projection. We shall see. 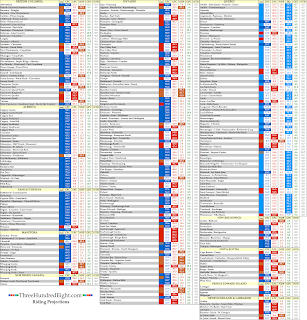