Liberal and Conservative ceilings after Week 2

The Conservative ceiling is based on obtaining roughly 45% of the vote nationwide, with roughly 50% in British Columbia, 66% in Alberta, 63% in the Prairies, 46% in Ontario, 25% in Quebec, and 45% in Atlantic Canada.

These results would give the Conservatives 25 seats in British Columbia, 28 in Alberta, 24 in the Prairies, 62 in Ontario, 12 in Quebec, and 15 in Atlantic Canada for a total of 167 seats. That's seven more than last week's ceiling.

The Liberals and New Democrats would each lose about eight or nine seats, with the Bloc dropping three to 44 in Quebec.

It's a ceiling that depends on a few things. The Conservative results in British Columbia, Alberta, and Quebec are not unrealistic. Ontario and Atlantic Canada would have to swing heavily their way, with the party piling up support in the two Prairie provinces. 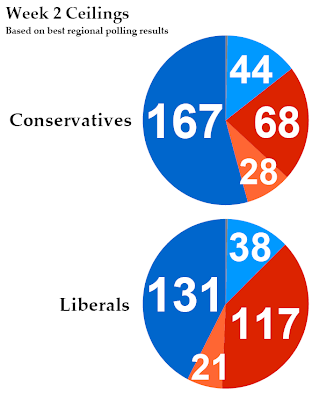 These results would give the Liberals eight seats in British Columbia, two in Alberta, five in the Prairies, 55 in Ontario, 22 in Quebec, and 24 in Atlantic Canada for a total of 117 seats. That is 31 more than last week's ceiling.

The Conservatives would still win the most seats with 131, but with the Liberals being so close to the Conservative total and more likely to win the support of the other opposition parties, we would likely see the Conservatives defeated on the throne speech and Michael Ignatieff installed as Prime Minister with these numbers.

However, this scenario depends on many lucky breaks for the party. While their result in the Prairies is completely plausible, and we've seen the Liberals doing better in British Columbia lately and dominating Atlantic Canada in past elections, the results in Alberta, Ontario, and Quebec are a little more fanciful.

Getting the support of 1 in 4 Albertans is not out of the realm of possibility, as the Liberals have done it before as recently as 2004. We've also seen the Liberals at over 40% in Ontario in past years, but in order for the Liberals to win this many seats this scenario requires the NDP vote to collapse in Ontario to 8%. That seems unlikely. And in Quebec, the Bloc vote needs to collapse to 28%. Again, that is less than likely, though the Liberals at 27% support in the province would not be unusual.

But the ingredients to a result that puts the Liberals at more than 100 seats do exist. We just haven't seen any consistent or steady results putting the Liberals in that range.

You can see today's projections on The Globe and Mail's website. They don't include today's Nanos poll, but do include the Ipsos Reid and Nanos numbers from yesterday. Tomorrow morning's update here will include these polls, as well as tomorrow Nanos and any other new numbers that appear.
Posted by Éric at 11:45:00 AM