Today's daily Nanos poll for CTV and The Globe and Mail shows very little change from yesterday, but the close race that Nanos has found to be the case in Ontario has been further confirmed by a new release by the Innovative Research Group, an opinion polling firm with offices in Vancouver and Toronto. Apparently, we should expect to hear from them periodically during the campaign with a look at the situation in Ontario. 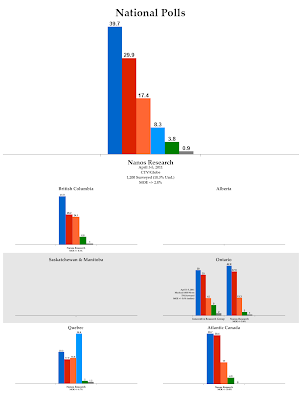 The latest Nanos poll shows a bit of a reset in Ontario, with the Conservatives picking up 3.2 points and the Liberals losing 3.2 points, resulting in a more familiar gap between the two parties than yesterday's Liberal edge. But if we compare the newest IRG poll to Nanos's poll taken on the same dates (April 1-3), we see a similar gap. Innovative Research has the two parties at 39% and 35%, for a gap of four points, while Nanos had the parties at 43% and 37.5% on the same dates, a gap of 5.5 points. Considering the margin of error (though as Innovative Research uses an online panel the sampling margin of error does not apply) those are consistent results.

A closer race in Ontario is an important new reality in this campaign. At it's start, the Conservatives had a double-digit lead in the all-important battleground province.

Note that Maclean's records support as being at 37% and 33%, respectively. This is before discarding the undecideds. The various reports for the radio networks mention support being at the 39% and 35% noted above and used in the model.

The Innovative Research poll also included a few other questions, and broke down support in Ontario by how people voted in the Toronto municipal election. The Conservatives have about 65% of the Rob Ford vote but only 3% of those who voted for Smitherman and the other candidates. Certainly, having most of Mayor Ford's vote is good news for the Conservatives, but not for their hopes of breaking into downtown Toronto. It was the outskirts of the city that voted for Ford, not the downtown core. But it could put a few of the Liberal MPs on the fringe of Toronto's boundaries at risk.

The Liberals have 18% of the Ford vote, but 51% of the "other" vote. Using the 2010's mayoral election results, we can then estimate that the Conservatives have the support of roughly 33% of the people who voted in the Toronto election, compared to 35% for the Liberals.

Stephen Harper and Michael Ignatieff have very close favourability ratings in Ontario: 39% for Ignatieff and 37% for Harper. But when it comes to who would make the best Prime Minister, Harper gets the edge: 34% to 26%.

Aside from the reset in the Nanos poll in Ontario and the drop of 6.5 points by the Tories in British Columbia (not statistically significant, or at least not yet), there is an interesting result in Quebec.

I've harped on it a lot already, but I was sure that Jack Layton's appearance on Tout le monde en parle, the incredibly popular TV show on Radio-Canada, would result in a bump. His party was up a point in Quebec yesterday and is up another 0.9 points today, so we really could be seeing the effect of that appearance. The NDP is now at 18.8% in Quebec, ahead of the Liberals. A lot of minds have to be made up in Quebec, though, as it is the region with the highest number of undecideds in this poll (27%).

But does this bump in Quebec mean any more seats for the New Democrats? Plugging these results into the projection model (and only these results) gives the Bloc Québécois 50 seats, the Liberals 12, the Conservatives 11, and the NDP two. Outremont and Gatineau are the two NDP seats, and that is even with taking into account the Segma polls released just prior to the start of the campaign showing the NDP well behind in the Outaouais.

This would also put them within range of a few other seats as well. The NDP would be within four points of the Liberals in Hull-Aylmer, seven of the Bloc in Jeanne-Le Ber, and three of the Liberals in Westmount - Ville-Marie (though the NDP are probably riding on Anne Lagacé Dowson's 2008 coattails in that riding in the projection).

The questions asked by each of the pollsters are as follows: "For those parties you would consider voting federally, could you please rank your top two current local preferences?" (Nanos). "If a federal election were held today, which party would you vote for?" (Innovative).
Posted by Éric at 2:05:00 PM