NDP gains in Quebec, but no new seats - yet

The Twitterverse was abuzz late last night, as rumours began being spread that CROP and EKOS would be releasing two polls showing the New Democrats ahead of the Bloc Québécois in Quebec. The gossip didn't disappoint, as CROP put the NDP at 36% and EKOS at 31% in the province, with the Bloc standing at 31% and 24% respectively. Talk of an NDP sweep of Quebec and of Jack Layton as Canada's next leader of the Official Opposition abounded. Even the staunchest critics of polls came out to marvel at what CROP and EKOS had to say, seemingly forgetting their prior warnings and cautionary notes.

Of course, these two polls are remarkable. And whether they reflect the eventual May 2 result or not, they will have a huge influence on the campaign in Quebec and in the rest of the country. There is nothing particularly problematic with either of these polls and they do speak to a completely identifiable trend in Quebec - the NDP is gaining and the Bloc is losing. So there is no reason to dismiss them, but there is some reason to hold off on the congratulatory toasts. I'll address these two polls, and the others added to this morning's projection, later this afternoon.

But even without the Innovative poll, I would not have had the NDP at 30% in Quebec. The projection model has always been skeptical when it comes to new trends. Until this level of support becomes a consensus opinion, and not one that lasts for a few days, you can expect this kind of approach to big swings like the ones we've seen in the CROP and EKOS polls today. And I should emphasise that it is not me being skeptical, but the model itself. It is hard-wired to react this way, and the ephemeral Liberal lead in Ontario is a good example of why it is the proper way to go.

Nevertheless, there have been some changes at the national level. The Conservatives and Liberals are each down 0.1 point to 38.6% and 27.9%, respectively, while the NDP is up 0.3 points to 18.2%. That is a big jump in national support, and actually puts them even with their 2008 performance. I suspect they will surpass it in tomorrow's update.

Regionally there have been very few changes.

Except in Quebec, obviously. There the NDP has gained 0.8 points and now stands at 19.3%. Long-time readers of the site will know that a 0.8-point gain in a day is huge. And only a few weeks ago people would have laughed at the NDP being pegged even this high.

While the NDP gains, the other parties fall. The Bloc Québécois has dropped again and is now at 35% support, while the Liberals are down 0.2 points to 20.4% and the Conservatives are down 0.1 point to 20.1%. With a few more polls confirming the NDP as the top federalist option, the projection model will begin to reflect that as well.

However, despite this gain for the NDP there have been no seat changes in Quebec, or anywhere else. Getting over the bar of two seats in Quebec will require more gains for the party, but once they get there we should start seeing a few seats dropping here and there with every point gained. 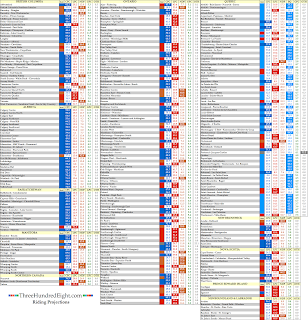