Five new polls have been added to the projection and the slow progression of the New Democrats in the model continues. Polls from Angus-Reid, EKOS, Forum, Ipsos-Reid, and Nanos were added this morning.

There might be quite a few of you impatient with how slowly this projection moves, but I have to point out that the stellar NDP growth in Quebec and in Canada as a whole is quite new - just days old, even - and the projection model will take some time to buy that this is really what is going on and that it is something that will stick. But I assure you that if the NDP and Liberals are still tied at the national level on May 1, they will also be in the model. In fact, if this current rate of increase and decrease continues at the same pace, the New Democrats will pass the Liberals in national support late next week.

But if things reverse themselves - and to paraphrase Paul Wells, in Canadian politics the least interesting thing to happen is the most likely - the model's caution will be well-rewarded. And if they don't, there is still enough time for it to be reflected in the final projection.

Nevertheless, there still have been some major changes in the last 24 hours. The Conservatives remain stuck at 38.6%, but they have gained three seats and are now projected to win 150. The Liberals are down 0.5 points to 27.4% and four seats to 76, back under their standing at the fall of the government.

The remarkable growth of the NDP can be seen in this regional breakdown. They are up about a full point in British Columbia, the Prairies, Quebec, and Atlantic Canada, an amazing amount of change in only one day. They are also up 0.5 points in Ontario and 0.3 points in Alberta.

In Quebec, the Bloc has dropped 0.6 points to 34.4%, while the NDP is now second in the province with 20.2%. Nothing like this has ever happened in the 30 months that I have been doing projections, so its significance cannot be understated.

The Conservatives pick-up two seats in Ontario and one in Atlantic Canada from the Liberals. The two Ontario seats are Brampton - Springdale and Kitchener - Waterloo, where Parm Gill and Peter Braid are now the respective favourites. In Atlantic Canada, incumbent Conservative Gail Shea is once again projected to win Egmont on Prince Edward Island.

The New Democrats have picked up their seat in British Columbia. Don Davies, the incumbent, is the projected winner in Vancouver Kingsway.

In this case, the Liberals suffer most from the NDP surge. But who will be the next to fall?

There are 15 seats in the projection where the NDP is within 10 points of the leader. Two of those seats are held by the Bloc Québécois, five by the Liberals, and eight by the Conservatives. So the NDP could be a bit of an equal opportunity spoiler. But in a lot of close Conservative-Liberal seats, the NDP's increase in support could turn more than a few ridings over to Stephen Harper. 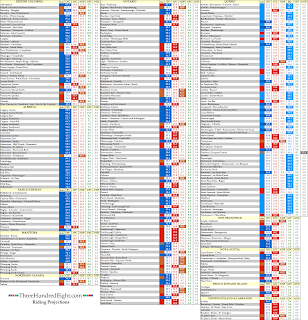 UPDATE: Projection with last week of polls only

As I've explained on numerous occasions, my projection model works slowly. It is skeptical to new trends until they can be proven over many polls and many days. But what if we just take the last week's worth of polls?

The result isn't incredibly different. Nationally, with only the last week of polls, I would project 152 seats for the Conservatives, 71 for the Liberals, 44 for the Bloc Québécois, and 40 for the NDP. In Quebec, which is where everything is happening, the Bloc would win 44, the Liberals 14, the Conservatives 11, and the NDP five. Remember that several of the polls over the last week pegged the NDP at less than 20% in Quebec, and Nanos still has them behind the Bloc, with Ipsos putting the gap between the two parties at one point. So a consensus remains elusive.
Posted by Éric at 8:22:00 AM