There's only one national poll to review today, but there are two riding polls that have been added to the mix over the weekend. They were both taken in Quebec and they both show that the New Democrats are competitive. However, aside from the polls for Gatineau and Outremont we have yet to see the New Democrats leading in any individual Quebec riding polls. Might they be the runners-up across the province? 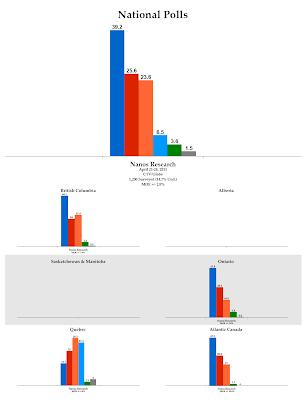 The Liberals, however, have dropped 1.1 points in the past four days and now stand at 25.6%, only two points ahead of the NDP. They have gained 1.5 points over that time period.

These variations are not statistically significant, but they are part of a discernible trend.

In Ontario, the Liberal vote has collapsed. It has dropped 7.1 points since April 18-20 and now stands at only 29.3%. The Conservatives are up three to 47.8% while the NDP is up 2.3 points to 16.9%, still below their 2008 performance. With a split like this, the Conservatives will have no problem winning a majority.

Looking at Nanos's daily tracking charts, we can see that the Liberals have been dropping steadily for almost a week in Ontario and Atlantic Canada. The Bloc has also dropped for five straight days. The NDP has been rising in Ontario, but they still have some ways to go before they can win new seats.

The same goes for the NDP in Quebec, at least according to two new riding polls.

The first was conducted by Segma Recherche for La Voix de l'Est, a newspaper based in Granby. It shows the Bloc's Christelle Bogota (who left the NDP shortly before the campaign began) leading with 32%. That is only a drop of three points since the 2008 election, however.

The New Democrat Pierre Jacob is not far behind with 26%, an increase of 17 points since the last election. Apparently the NDP's vote grew with each day of the poll and by the end of it Jacob was leading, but we're talking a daily sample of 100 or so people.

The Liberals, at 26%, are also in the race, but that is a drop of seven points. The Conservatives are also down seven points to 11%.

But this poll does show how the New Democrats are competitive in ridings that would not have been considered likely pick-ups for them before the campaign began. But the Bloc vote appears solid in the riding, despite the provincial drop in support.

The projection was within four points for the Bloc, Liberals, and Greens in this riding, but underestimated the NDP vote by 10 points. This could be a common refrain on election night, but the NDP still has some ways to go in my projection model. We just need a few more days. 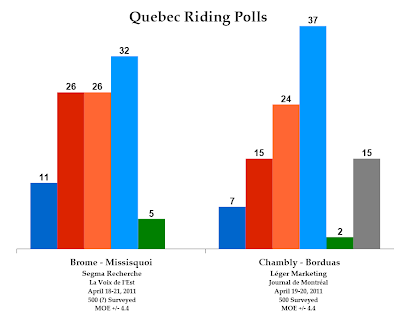 The other riding poll was conducted for Chambly - Borduas, a riding east of the island of Montreal. In this poll, Yves Lessard of the Bloc has a comfortable lead with 37% support but that is a drop of 13 points since 2008. The New Democrats have taken up some of the slack, and their candidate Matthew Dubé is running second with 24%, up 10 points since the 2008 election.

What is most interesting about this riding is the presence of an independent: Jean-François Mercier. He's a well-known actor/comedian with a somewhat rough sense of humour. Nevertheless, 15% of the riding's residents intend to vote for him. According to the poll, about half of his vote comes from former Bloc supporters.

The Liberals are running third with Mercier at 15%, generally where they were in 2008. The Conservatives are down about eight points to 7%.

Aside from Mercier, the projection was good for this riding. It was only off by one point for the Liberals and the NDP (that is an especially good sign), though it was off by eight points for the Bloc and six for the Conservatives. That is mostly attributable to the unpredictable nature of Mercier's candidacy.

These polls tell two different stories for the Bloc but just one for the NDP. In Brome - Missisquoi the ability of the Bloc to hold on to its vote is demonstrated, while in Chambly - Borduas we see Bloc supporters jumping to a slightly ridiculous option. But combined with the Bloc's dropping support in Brome - Missisquoi over the four days of the sample, we can speculate that the Bloc's support is proving to be very soft. Perhaps after voting Bloc for almost two decades many Quebecers are starting to become curious about other options.

And in both ridings we see that the other option is the NDP. They are the most popular federalist option in these two ridings, a real strength considering that the NDP appears to be drawing support from social democratic sovereigntists (or soft nationalists) as well. And when we consider the margin of error, the NDP has a good shot in Brome - Missisquoi and several of the other ridings that have been highlighted in these riding polls.

On the other hand, the NDP has yet to be shown in the lead in a riding other than their two main targets: Gatineau and Outremont. Getting 20%-30% of the vote in a dozen or two ridings might be very likely for the NDP on May 2nd, but getting over that 30% mark and actually winning could be too much for a party with a weak ground game in the province.

The NDP's main opponent in Quebec has a relatively well-oiled machine, and has the apparatus of the Parti Québécois from which to draw. The Conservatives were able to win seats in 2006 out of the blue, but the provincial Liberals were helping them and it is far easier to elect government MPs.