NDP takes another seat, and why they might not win 50 more

Several national polls were added to the projection this morning. There's the EKOS poll from yesterday and the Angus-Reid and Nanos polls from today, along with numbers from Innovative and Oracle. The net result is one seat gain by the New Democrats, who are now tied with the Bloc Québécois at 43 apiece.

But the Angus-Reid poll puts the NDP closer to the Conservatives than they are the Liberals, and we've now seen over a half-dozen polls released in less than a week showing the New Democrats in second place. My projection still has them in third. There are a few reasons for this.

Most importantly, this is simply how the projection model is designed. It is meant to react slowly to new trends until they can be shown to be consistent and prolonged. With the NDP surge coming at the tail end of the campaign this might be coming too quickly and too late for my projection model to capture it completely. That's a limitation of the math - but is it also perhaps a reflection of what might actually happen on Monday night?

While the latest poll numbers would seem to strongly disagree with my projection, I actually believe my own numbers are closer to what the result will be in five days.

If the polls are right, we are witnessing a transformation of Canadian politics. That shouldn't be taken lightly. The potential results of 2011 have been compared to the 1993 election, but even that parallel might not be on the money.

The emergence of the Bloc Québécois transformed politics in Quebec, but considering what was going on at the time in the province it was an almost inevitable result. Supporters of the Parti Québécois were easily transferable over to the Bloc Québécois and support for sovereignty was running hot.

In the West, anger over how the region had been treated by the mainstream parties boosted the Reform Party to prominence. That it would be so effective was certainly a surprise, but that this sort of populist right-wing conservatism could find wide support in the western provinces is not outlandish. And, in the end, the Reform/Canadian Alliance was reborn into the Conservative Party, so it's almost like Western Canadians never left the conservative movement - the Progressive Conservative Party just left the conservative movement for a decade.

Now, the Liberal Party is to be crushed at the polls and be replaced by a party further to the left, but not for any particularly compelling reason besides the notion that Canadians like Jack Layton more than they do Michael Ignatieff. This hasn't been a campaign about the policies pursued by these two parties, and likeability may not be enough to get first-time New Democratic voters out to the polls. And this is a major problem.

The biggest boost the party has been getting in the country is in Quebec. In fact, more than half of the NDP's boost in support is located in Quebec. But according to their own people in the province, they don't have a local organization worth its salt in more than six or eight ridings. If they win elsewhere, it will be due to their rising support and not their own local efforts. A swell of sympathy for the party might get them 25% in a lot of ridings in Quebec, but in order to get them up and over the 30% mark that puts them in contention they will need more than a likable leader in the face of the well-oiled and experienced ground organizations of the Bloc, Liberals, and Conservatives.

And that is the difference between voting intentions and actual votes. Voting Conservative or Liberal or Bloc is nothing new for a lot of voters, so saying they intend to vote for those parties is not a stretch. Saying they will vote for the NDP, a party that they have likely never voted for in the past, is far less likely to hold true when they reach the ballot box.

The 1988 federal election is often cited as an example of when NDP support couldn't carry over to election night. In fact, the party dropped roughly seven points between the start of the election and voting day.

But I feel that the 2010 British election is a far better example. In that election, the Liberal Democrats were coasting in the polls, tied for second with Labour. While the Liberal Democrats are a centrist party, they do have a similar reputation in Britain as the New Democrats do in Canada: a third party with a likable leader, but a party lacking the gravitas of a government-in-waiting and a full slate of good candidates.

In the end, the Liberal Democrat vote toppled by about 4-5 points compared to their standings in the polls, and they only won 57 seats - which actually represented a loss for the party. The polls overestimated Liberal Democrat support and the party's weak organization failed against the stronger ones of the Conservatives and Labour. And, in the end, old voting habits were hard to break.

And that's why we shouldn't be so sure that these levels of support for the New Democrats will hold on Monday night. It isn't because the pollsters are wrong - they are tracking voting intentions after all. But correctly capturing the ability of these intentions to turn into votes is a very different thing for a party like the New Democrats, despite polls showing respondents "certain" to vote for them and unlikely to change their minds. Polls tracking the likelihood of Canadians actually voting often overestimate turnout by as much as a third.

UPDATE: A few commenters brought up the example of the ADQ's breakthrough in Quebec in 2007. It is a good counter-example, but I don't think the situation is the same. Mario Dumont was a fixture in Quebec politics for more than 13 years by the time of the 2007 election, and his party was following in the footsteps of the Conservatives' breakthrough in the province the year before. As Mario Dumont and Stephen Harper saw eye-to-eye on many issues, he seemed like a good premier for the province in the context of a Conservative federal government. And Quebecers who voted Tory in 2006 did not have to go very far on the spectrum to vote ADQ in 2007. The NDP is not in a similar situation in Quebec in 2011, though parralels in terms of the lack of organizational infrastructure and a strong team of candidates do exist.

Regionally, the growth of the NDP is clear. They are up big in the Prairies, Ontario, Quebec, and Atlantic Canada, and are also taking steps forward in British Columbia and Alberta.

The Conservatives are mostly dropping, as are the Liberals. But the Grits are spared losing a swathe of seats to the Tories - for now - as both parties are dropping at roughly the same rate where it matters.

The one seat to change hands is Drummond, formerly held by the Bloc. François Choquette of the NDP is now the projected winner.

Several other seats are very close to turning orange. In the West, the NDP is trailing by five points or less in Surrey North, Vancouver Island North, Nunavut, and Saskatoon - Rosetown - Biggar, all Tory seats.

They are not within that range in any seats in Ontario, but several in Quebec (Brossard - La Prairie, Laval - Les Iles, and Saint-Lambert) and Atlantic Canada (Central Nova, Dartmouth - Cole Harbour, South Shore - St. Margaret's, and St. John's South - Mount Pearl) are trending towards the New Democrats.

If they capture all of those seats, the NDP would be at 54 in total, with the Conservatives at 140, the Liberals at 71, and the Bloc at 42. So there is still plenty of room for growth for the NDP in the short term. Capturing another 50 or so, however, will be difficult. 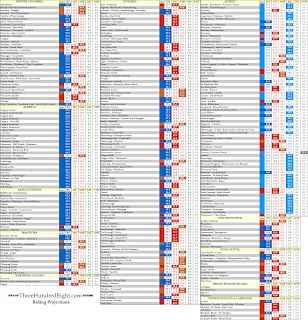