A flurry of polls were released this morning (Nanos, Angus-Reid, and Léger Marketing). And with the incorporation of all of the polls that were released over the weekend (EKOS, Nanos, Forum), there's a lot of change in today's projection - and it isn't good news for Stephen Harper.

Since Friday, the Conservatives have dropped 0.3 points to 38.7% and three seats to 149, the lowest they've stood in this campaign so far. The Liberals have dropped 0.2 points to 28%, but because of gains in Ontario, Quebec, and Atlantic Canada the party is up five seats to 78. That's a gain of one seat since the government fell.

The New Democrats were buoyed today by some great polls for them from online pollsters Léger and Angus-Reid, and they are up 0.8 points in the projection to 17.6%. Long-time readers will know that is a huge update-to-update change at the national level. They are also up one seat to 34.

I was not able to get my hands on the full details of the Léger poll for this update, and media reports by the QMI Agency were incomplete. Only the national and Quebec numbers were added to the projection. Léger is usually pretty quick with updating their site, so hopefully I will be able to add the other regional numbers to the projection tomorrow.

The Conservatives have remained relatively stable west of Quebec, dropping 0.2 points in Ontario but gaining 0.1 points in British Columbia and the Prairies and 0.2 points in Alberta.

The Liberals are up marginally there and in Ontario, but dropped a full point in the Prairies. The bright spot for them is their closing of the gap in Ontario by 0.3 points and their holding steady in Quebec while the Bloc dropped a point.

The New Democrats, however, are up everywhere. British Columbia saw only a modest gain, but the party jumped 0.4 points in Ontario, 0.6 points in the Prairies, 0.7 points in Atlantic Canada, 0.8 points in Alberta, and an amazing 1.7 points in Quebec. They now stand at 18% in the province, within reach of the Liberals and Conservatives.

And that is a problem for the Bloc, which has dropped another point to only 35.9% support.

There have been quite a few seat changes since Friday morning.

In Ontario, the Liberals have retaken Brampton - Springdale from the Conservatives. Ruby Dhalla, the incumbent Liberal candidate, is again the favourite.

In Atlantic Canada, the Liberals have moved ahead in the projection in Random - Burin - St. George's, a riding in Newfoundland & Labrador. Judy Foote is the Liberal incumbent there. And in Prince Edward Island, Guy Gallant is now favoured over Gail Shea in the riding of Egmont. That's another Liberal pick-up from the Tories.

The Liberals have taken Ahuntsic (Noushig Eloyan) and Brossard - La Prairie (Alexandra Mendes) from the Bloc Québécois in and around Montreal. The New Democrats have also taken Gatineau from the Bloc. Françoise Boivin, the NDP candidate, is the favourite here.

That makes for a lot of change, and it appears it could continue. The NDP is riding high in Quebec and though they are still a little ways away from taking a third seat, it is certainly a good possibility that they will get to that point. But the kinds of support we saw in today's polls will need to hold firm.

The Conservatives are looking flat, but they are still comfortably ahead. But their prospects for a majority seem to be slipping away. 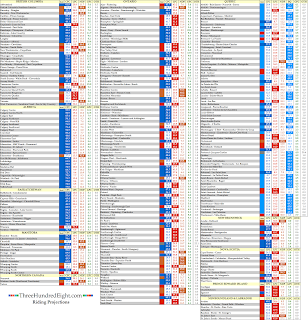