New Democrats up, Liberals and Bloc down

Three new national polls (not including this morning's EKOS) and a stunning 10 new riding polls have been added to the projection. It has created quite a bit of movement, but still not as much as I'd like to see. Nevertheless, the New Democrats are growing by leaps and bounds and are starting to knock-off Conservative seats in British Columbia and even Quebec.

The Bloc Québécois is at 7.2% nationally and has dropped two seats to 41. That is still a high number considering they are now projected to be at 29.9% support in Quebec. While this is the result of the slow movement of my projection model, I think it will also end up capturing the problem the NDP will face getting the vote out and keeping it there in Quebec.

Note that I will be doing another update here on ThreeHundredEight tomorrow, with my final projection being put up on this site on Sunday.

The Conservatives are wobbling, but they are still firmly in the lead. They've dropped about a third of a point in British Columbia, Alberta, and Quebec, but have gained that much in Atlantic Canada while being stable in the Prairies.

A drop of 0.7 points in Ontario, however, hurts the party. They are now about where they were in 2008, making new seat gains difficult as the Liberals are also about at their 2008 level of support.

In fact, Ontario is the only part of the country where the Liberals are not in free fall. They've dropped big out West, are down another 0.2 points in Quebec, and are close to losing the lead to the Tories in Atlantic Canada.

The Bloc continues to suffer and has dropped below 30% support in Quebec.

The New Democrats, on the other hand, are up 2.2 points in the province to 29.6%. That is their best result in the country. They also gained 0.7 points in Ontario and 0.9 points in British Columbia. They still have some room for growth.

In North Vancouver, the Conservative incumbent Andrew Saxton is now projected to retain his seat. It had been held by the Liberals in the projection for the entire campaign. Also in British Columbia, the New Democrats are now projected to win Surrey North, a Conservative riding. Jasbir Sandhu is the NDP candidate there.

And in Quebec, the New Democrats have wrested Portneuf - Jacques-Cartier from independent, Conservative-endorsed MP André Arthur, a state of affairs confirmed by today's CROP poll. The New Democrats have also taken Laval - Les Îles from the Liberals (François Pilon is the NDP candidate) and two seats from the Bloc: Laval (José Nunez-Melo) and Châteauguay - Saint-Constant (Sylvain Chicoine). 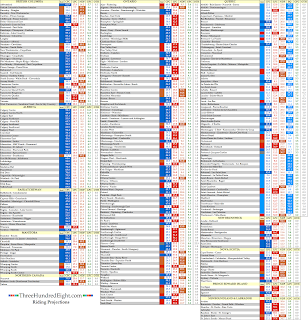