The New Democrats are up 0.2 points to 17.8% and one seat to 35, still a net loss of one seat but a high watermark for them as well. The Bloc Québécois, meanwhile, is unchanged at 8.6% nationally but has dropped two seats to 45, their lowest point of the campaign. As the third vacancy was a Bloc-held seat, this means the Bloc is actually down three seats compared to where they were before the election.

The Greens are steady at 5.8%, while an independent is now projected to be elected.

Aside from a small uptick in British Columbia, the Conservatives are down in every part of the country. But this should not be overstated, as all losses (with the exception of Alberta, where little is at stake for the party) were of 0.2 or fewer points.

But another drop in Ontario is problematic, as it coincided with a 0.1 point gain for the Liberals and New Democrats. This has caused a couple seats to flip.

This is not an entirely good update for the Liberals, despite the seat gains. They dropped 0.3 points in British Columbia and the Prairies, and they are now third behind the NDP in Saskatchewan and Manitoba. They also dropped 0.4 points in Atlantic Canada. The small gain in Ontario is positive, of course, and with the Bloc and Tories dropping in Quebec a steady number is not bad news for Michael Ignatieff.

For Jack Layton, however, things are looking up. Aside from a loss in Alberta (which does not put Linda Duncan in danger, yet) the NDP is up everywhere, with decent 0.3 to 0.4 point gains in British Columbia, Quebec, and Atlantic Canada. Though the party needs to gain a lot more in the two eastern regions to pick-up more seats, the gain in British Columbia could be reflected in seat gains soon - if it continues.

Things continue to look bad for the Bloc Québécois. They are down another 0.4 points while the Liberals and NDP are gaining or holding firm. The consolation of the Tories dropping might not be enough, as the party isn't poised to take any Conservative seats just yet. Even today's CROP poll for Portneuf - Jacques-Cartier put the Bloc behind the independent incumbent André Arthur.

And in some degree because of that poll, the riding is now projected to be won by Mr. Arthur rather than the Bloc. The other seat change in Quebec is to the benefit of the Liberals at the expense, again, of the Bloc. Nancy Charest, who ran a good campaign in 2008, is now the projected winner in Haute-Gaspésie - La Mitis - Matane - Matapédia. That is a gain, as it was held by the Bloc prior to this election. If this seat is won by the Liberals on May 2, it would be quite a coup considering it is a francophone rural riding well outside of Montreal (it's almost as far away as you can get from Montreal in Quebec!).

Two seats in Ontario have also changed hands. Andrew Telegdi, the former Liberal MP in Kitchener - Waterloo, is now projected to win over the Conservative incumbent Peter Braid. In the north, the NDP incumbent Tony Martin is once again the projected winner in Sault Ste. Marie, meaning the Tories have lost two seats in the province in the projection.

If things continue along this path, the Conservatives and Bloc - the two parties everyone expected would come out of the election stronger than they entered it - will be the net losers of the 2011 election.

We are now less than two weeks from election day. While there is still plenty of time for both Stephen Harper and Gilles Duceppe to turn their ships around, there may also be enough time for Michael Ignatieff and Jack Layton to make some real inroads and threaten the Conservatives' minority. 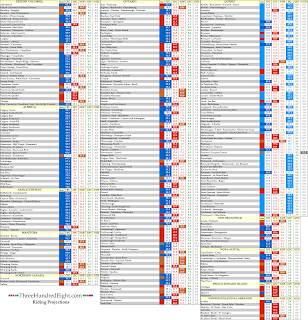