When the ballots were all counted, the Progressive Conservatives won 48.9% of the vote and 42 seats, doubling the size of their caucus from when the writ was dropped. The Liberals held on to only 34.4% of the vote and 13 seats, being reduced to a small rump of an opposition.

No other parties elected an MLA. The New Democrats took 10.4% of the vote, with the Greens taking 4.5% and the People's Alliance 1.2%. Independents took the remaining 0.6%.

In the last week of the campaign, it appears that people turned hard against the Liberal government, with many of the undecideds casting their ballot for David Alward's party, in what was a decent turnout (72.8%, the highest since 1999 and the last PC landslide).

I'm generally pleased with my projection, though not completely content. I did project a solid Progressive Conservative majority, and I was within a whisker of getting all of the second tier party votes absolutely correct. However, I was incorrect in calling an NDP seat win and I over-estimated the strength of the Liberal vote. IBut the polls never had the Liberals as low as 34% and in the last set of polling it appeared that the gap between the two main parties was closing.

As you can see on the chart below, the PC vote actually rebounded very strongly, compared to the polls. I had their daily average at about 44% on the last day of polling, and they picked up five points from there. 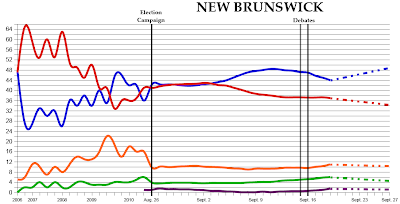 The Liberals were at about 37%, and they lost three points, though in the end their trend line looks relatively consistent. Remarkably, the NDP, Greens, and People's Alliance held on to their vote very well. They hardly lost any of the support that they had in the polls.

But my call on the seats was off. Instead of 31 seats, the Progressive Conservatives won 42. Instead of 23 seats, the Liberals only won 13. And instead of one seat, the NDP was shut-out. That was a bit of a surprise, as the NDP had run a good campaign and Roger Duguay looked like he had a lot of promise in Tracadie-Sheila. He put up a good fight and finished in second in the riding, but was still about 17 points behind.

However, I did choose the winner and the type of government, which I am happy about. Other projectors had the race much closer than I did, and with the Liberals bucking a trend of re-elected first-term governments, it was a bit of gamble to choose the PCs when it appeared that their support was slipping. Of course, it would have taken a lot of chutzpah to call a landslide of this magnitude.

I am very pleased at how the popular vote turned out - at least for the smaller parties. 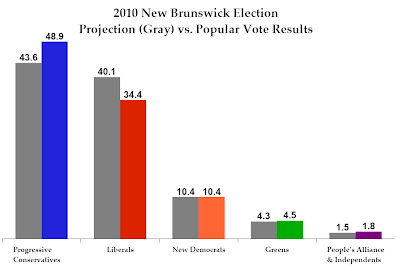 I was off by about five points for both the Progressive Conservatives and the Liberals, but it appears that this is how the undecideds split in the last week of the campaign.

I had the Progressive Conservatives at 43.6%, and they ended up with 48.9%, for a disparity of 5.3 points. I had the Liberals at 40.1% and they ended up with 34.4%, a disparity of 5.7 points. I am not happy with those results, but it would have been going out on a limb to have the Liberals at lower than they ever got during the campaign. I under-estimated the PC vote, but I think everyone was surprised at how it turned out.

So, what went wrong? Clearly, my estimation of the popular support of the PCs and Liberals was off. I can lay some of the blame on the pollsters, as no one had this result, but a lot of it also has to go on me. I believe I put a bit too much importance on older polls - but it was difficult to base the projection on new ones when so few new ones were available. The last bit of polling from the Corporate Research Associates, the poll that was done for the Telegraph-Journal ending on September 19, was actually not too far off: 46% for the PCs, 36% for the Liberals, 11% for the NDP, 6% for the Greens, and 1% for the People's Alliance. But their larger sample which was given to me personally, and which also ended on September 19, turned out to be far more inaccurate and, in the end, it was a mistake for me to include it.

The seat projection, though, was not the problem. 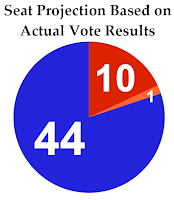 Had my popular vote projection been dead-on, I would have projected 44 seats for the Progressive Conservatives, 10 for the Liberals, and one for the NDP. People would have called me mad, but in the end that would have been remarkably close to the 42/13 split that was the result between the Liberals and the Progressive Conservatives. I would've gotten the NDP seat wrong, but it was a very tough call considering I had to estimate the NDP's chances of winning one individual riding based on nothing but province-wide numbers.

Now that the results are in, I have to say that I am generally happy with how the projection model operated. The seat projection model was good, but the popular vote model was not. Part of the problem was the lack of polls and the lack of polling in the last week, but for next time I will have to work on a method to estimate support when there are no polls available. But I got the vote right for the small parties, and called a sizable PC majority, so all in all I think my projecting of the 2010 New Brunswick campaign was a qualified success.
Posted by Éric at 9:17:00 AM