So, EKOS is back and shows that the Conservatives have pulled away (again) from the Liberals. The gap is still relatively small, however, and becomes murky when the margin of error is taken into account. 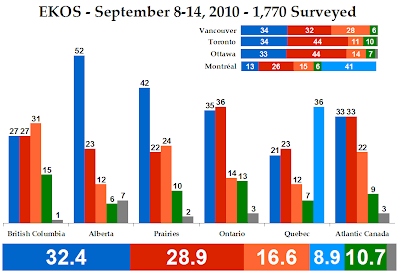 While the Conservatives can certainly be happy to be up above 30% in this EKOS poll, the result is actually not horrible for the Liberals. They have often been very low in EKOS polling, so to be at about 29% is not a bad spot for them. Even the NDP can be happy to see some growth.

The Conservatives lead in Atlantic Canada with 33.2%, up 14. Big jumps like that are always suspicious. The Liberals are down 11 to 32.5% while the NDP is up seven to 22.4%. Finally some life for Jack Layton on the coast.

In Alberta, the Conservatives are down six points to 52%. The Liberals have gained seven and are at 23.4%.

In the Prairies, the Tories are down nine points to 41.8%. The NDP is up eight to 24.4% (this isn't the first time we've seen an NDP jump in this region lately). 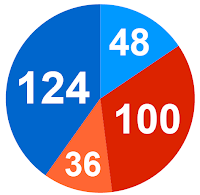 The Bloc would win 48 seats in Quebec.

The NDP would win 18 seats in the West, 12 in Ontario, four in Atlantic Canada, and two in Quebec for a total of 36.

The juxtaposition of Conservative gains in Quebec and losses in the West is interesting in the context of the arena-funding debate. It could, of course, be just a statistical variance but it could be something more. That is a big jump for the Conservatives in Quebec, one that they haven't seen too much of recently. It looks even bigger when you consider that the Conservatives were at 15.8% in EKOS's first week of polling in September. That jump has mostly come in the last week, which is just when this topic was in the news. Coincidence?

Though the NDP would prefer to be over 18% nationally, the seat projection for them in this poll would not be unwelcome. At the cost of some seats in Ontario, the NDP would make gains in British Columbia and Quebec - perhaps better spots for this social democratic party than in northern Ontario.

While this poll doesn't have the doom-and-gloom of EKOS's last poll, it will not quiet the talk of a close race between the Liberals and the Conservatives. As I've said before, the race is on - but Stephen Harper still holds the advantage. He can build from this level of support to put some distance between himself and Michael Ignatieff. That is something he must do, as a reduced minority would be almost as bad as losing the election.
Posted by Éric at 10:29:00 AM