Things are starting to move in the Telegraph-Journal/CRA daily tracking poll. While the Progressive Conservatives are unchanged from yesterday, when they gained two points, the Liberals have dropped two points. 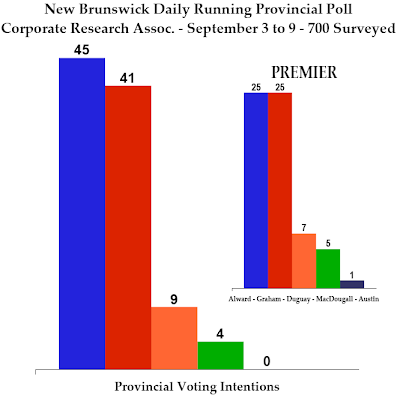 That gives the Progressive Conservatives a four point lead over the Liberals, 45% to 41%. Considering that the margin-of-error is 3.7 points, that is an important lead for David Alward.

The New Democrats also have some good news, as they are up one point to 9%. The Greens are also up one to 4% while the People's Alliance remains at less than 1%.

Undecideds are down a little to 25%, so still a significant portion of the electorate.

David Alward and Shawn Graham are tied at 25% apiece for Premier (down one for Graham) while Roger Duguay is up one to 7%. Jack MacDougall is unchanged at 5% while Kris Austin is down one to 1%. It isn't going well for the People's Alliance - not that anyone thought it would.

Removing none-of-the-above and undecideds, those Premier numbers become 40% for Alward and Graham each, 11% for Duguay, 8% for MacDougall, and 2% for Austin. There is still potential for the NDP and the Greens to grow. 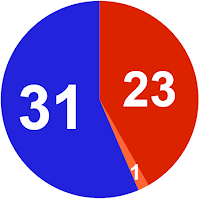 This poll would give the Progressive Conservatives a solid majority with 31 seats. The Liberals would win 23 and the New Democrats would win one.

As I've mentioned a few times, the projection will only be updated once per week for these CRA polls, in order to avoid overlapping polling dates. If this trend continues, I'm sure that my next site projection will have the PCs in front. It would be nice if another pollster would take a look at the situation, though. 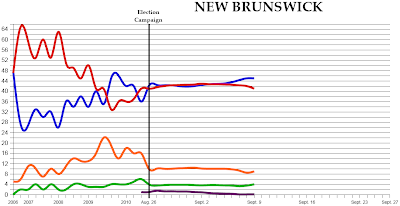