Elizabeth May and Gary Lunn neck-and-neck?

Back on September 3, the Victoria Times-Colonist reported on a poll taken by McAllister Opinion Research for the riding of Saanich-Gulf Islands. Most important is to remember that this poll was commissioned by the Green Party. Does that mean it is unreliable? Not necessarily. But just something to keep in mind because if McAllister reported something bad for the Greens the Greens wouldn't have released it to the wider media. So this might be the last time we hear from McAllister.

However, the poll is interesting because we rarely get to see polls from individual ridings. And on election night, the riding of Saanich-Gulf Islands will be watched very closely as it is where party leader Elizabeth May will be running against Conservative minister Gary Lunn. The Greens have changed their strategy to one of Elect-Elizabeth, so a lot of things will be riding on what happens in Saanich-Gulf Islands. 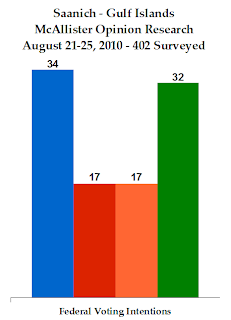 So, according to this poll the race is really one between the Conservatives and the Greens. Gary Lunn got 34% support in this poll, while May was at 32%. And when you take into account the margin-of-error, this is a virtual tie.

An interesting sidebar: Lunn will be running against three women.

Obviously, this poll is terrific news for the Greens. If this level of support held firm into an election campaign, it really would be a coin toss. And May in the House of Commons, whether or not she has any greater role than your average independent, will change things.

But let's look at this poll in the context of past elections. At 34%, Gary Lunn would be at his lowest level of support since 2004, when he was first elected under the Conservative banner. And it is a drop of nine points from last year.

For the Greens, who do have some history here as they were at 17% in the 2004 election, this is a big jump from the 11% the party had in 2008. Part of that increase in support could be coming from the Conservatives, but with a 22-point drop in Liberal support from the 2008 election, almost exactly the gain the Greens are seeing in this poll, we have to believe that most of it is coming from the Liberals.

It certainly isn't coming from the NDP, who were at only 6% in 2008. But, recall that this was the candidate who dropped out of the election because of some unseemly photos. There is a history of NDP support here (over 20% in both the 2004 and 2006 elections), so this 17% is not some sort of huge gain for the party.

Anyway you slice it, this is a fascinating poll and an important one for Ms. May's leadership. Many people criticized her for running in Nova Scotia, a province with little Green history, back in 2008. And others criticized her for choosing Saanich-Gulf Islands, as it was another so-so riding for the Greens that would put her up against a cabinet minister. If the riding was represented by a back-bencher, voters would have less to lose and would be, perhaps, more willing to take a chance on the Green leader. And then there is the whole issue of the leadership contest that was supposed to happen but was vetoed by the party at the urging of the party leader.

This poll vindicates her, at least a little.

Hopefully we will get another poll for this riding in the future. But even if we don't, this will continue to be a riding to watch.

Thanks to a commenter who forward me to this poll, also done for the Greens. It's a little older and has some odd findings, but confirms that the race is pretty close.
Posted by Éric at 5:57:00 PM