PCs claw back to a slim lead

The Telegraph-Journal is reporting on a new Corporate Research Associates poll in New Brunswick, and it shows that David Alward's Progressive Conservatives have picked up support and are now back in the lead. But I have more exciting news - it appears that this election will have more polling than any other.

I've been informed that CRA will be updating their site with more complete details of this poll. In the meantime, we can go on what the Telegraph-Journal is reporting. If it turns out that we can expect news reports in the morning and full polling details later on in the day, I may, in the future, just wait until CRA updates their site. But without further adieu... 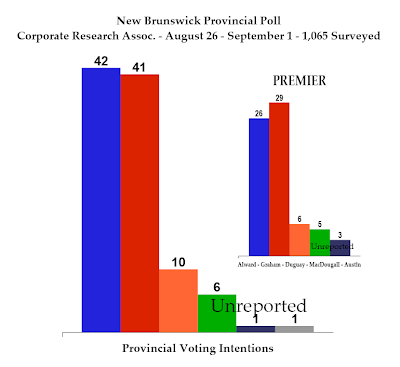 I will update the site with complete numbers when I have them, but for now the Progressive Conservatives are up six points and now lead with 42%. The Liberals are unchanged from CRA's August poll, and stand at 41%. A close race.

The New Democrats have dropped six points and now have 10%.

This is good news for Alward, obviously, but horrible news for Roger Duguay. It doesn't seem to be entirely his fault, however, as he has only dropped two points in the Premier poll, from 8% to 6%. Shawn Graham is still the leader with 29% (unchanged) but Alward has picked up four points and stands at 26%.

The Progressive Conservatives have scraped together their lead by being favoured among males, anglophones, and those over the age of 55. The Liberals still retain the 35-54 year old vote, support of women, and francophones. 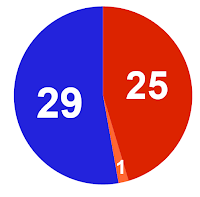 The Progressive Conservatives would win 29 seats with this poll, and form a slim majority government. The Liberals would take 25 and become the Official Opposition, while the New Democrats would elect one MLA. We can assume that MLA to be Duguay.

In terms of the projection, the Liberals maintain a slim advantage. They've dropped 0.5 points to 42.1% and have lost two seats to 28, but would still form government. The Progressive Conservatives have picked up 0.6 points and two seats (and now stand at 40.7% and 25 seats), while the NDP is at 12.2% (down one whole point) and two seats. That means the Liberals would have a majority of one. Pretty slim.
Posted by Éric at 10:28:00 AM