The Corporate Research Associates were kind enough to provide me with the results of their last days of polling, incorporating both the CBC/Acadie Nouvelle and Telegraph-Journal survey results from September 16th to September 19th. As it showed a much closer race than either the CBC or last TJ polls had shown, I decided that it must be included in the projection.

I went back and forth on this a little, as this data is not publicly available and requires me to discard the CBC poll and the last set of the TJ weekly tracking poll. As this data is from September 16th to 19th, however, it allows me to use the last full week of TJ polling (September 9th to 15th) and only lose one day of CBC polling. So, in the end, I think it gives me a better shot at an accurate projection for Monday's vote.

Because this data combines the CBC and TJ polls, we get the largest sample size of the electoral campaign - 1,250 people. The result shows that the latest data from Abacus appears to be accurate, as the Progressive Conservatives have taken a step back and lead with only five points over the Liberals. 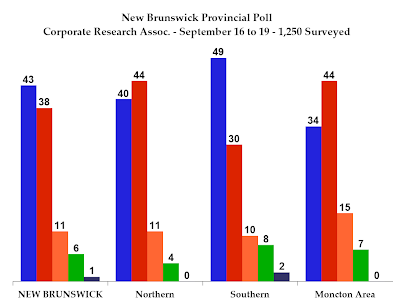 Compared to CRA's last TJ poll, 43% is a drop of three points for the Progressive Conservatives. It is a drop of four points from the CBC poll. The Liberals are up a little, from 36% in the TJ poll and 37% in the CBC poll to 38% in this last set of data. This tells me that in the last few days of polling the race has really gotten closer.

The New Democrats stand at 11% while the Greens are at 6%. The People's Alliance is at 1%.

What's great about the data that CRA provided me is that I have a regional breakdown.

In northern New Brunswick, the Liberals have a slight lead with 44% to the Progressive Conservatives' 40%. Compared to the 2006 election, it appears that both the Liberals and PCs haven't moved too much relative to each other, though both main parties seem to be about five points down. Those 10 points or so are going to the New Democrats and Greens. The NDP is running at about twice as much as they were at in 2006, which bodes well for Roger Duguay in Tracadie-Sheila. The Greens, who were not an active party in 2006, also take their fair share.

Where the Progressive Conservatives seem to have cobbled together their lead is in southern New Brunswick. They appear to be running at about the same level as they were at in 2006, with 49%, while the Liberals are down well over 10 points to 30%. This region seems to be the kingmaker of the election, which explains why Shawn Graham and David Alward have been fighting over Saint John. The New Democrats are, again, running about twice as strongly as they did in 2006, making a seat win in Saint John a possibility. The Greens are also doing well here with 8% support.

Finally, the Liberals have a good lead in the Moncton region with 44%. The Progressive Conservatives are behind at 34%, while the New Democrats are performing well with 15%. This could be a problem for the Progressive Conservatives, as the region has historically been good to them. The Liberals seem to be maintaining their 2003 and 2006 levels of support here, while the NDP is running at about three-to-four times more strongly than they did in 2006. But, of course, the sample size here would be very small and have a large margin of error.

So, with this poll the projection has changed only slightly. The Progressive Conservatives are down to 43.6% but are projected to win a majority with 31 seats (down one seat). The Liberals are up to 40.1%, and are projected to win 23 seats. The New Democrats are at 10.4% and one seat, while the Greens should take 4.3% of the vote. The People's Alliance and independents will take the remaining 1.5%.

With the slight downturn we've seen in Progressive Conservative support of late, I'm a little more comfortable with this projection than the previous one. This election does pose several problems for me, however.

Firstly, there have only been two active pollsters, CRA and Abacus, and the latter only released one province-wide poll. While this has provided me with more data than one would expect for a province of less than one million people, it is still not nearly as much data as we can expect in a federal election.

Secondly, one whole week will pass between the last bit of polling data and election day. Worse still, a debate is scheduled for tonight and the campaign has become particularly nasty in the last few days. When we consider that in the 2008 election there were a lot of changes in the last week of polling (one week before election day, the Conservatives were polling at more than four points lower than their electoral result), it makes it all the more difficult to be confident that the polls will hold steady. That is why I have included some older polls and past elections (though they are not given much weight) to act as a bit of a guide rail.

Hopefully this strategy will prove to be the right one.
Posted by Éric at 10:09:00 AM