After about two months of silence, Environics is back with a new federal poll. The top-line results show that not much has changed over the summer, but the regional results tell a somewhat different story. 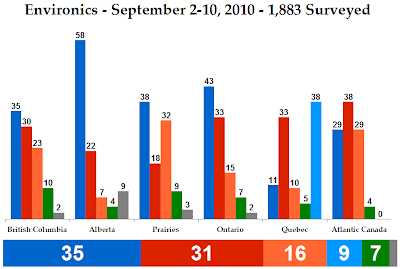 Compared to Environics' July poll, the Conservatives are unchanged at 35%. The Liberals are down one to 31% while the New Democrats are up one to 16%.

While the trend isn't exactly what we've been seeing elsewhere, both parties over 30% is certainly something we have seen.

In Ontario, the Conservatives are up a big seven points to 43% (a little high). The Liberals are down five to 33%. The NDP is steady at 15% while the Greens are at 7%.

The Liberals lead in Atlantic Canada with 38%, where the NDP is up seven to 27%.

The Conservatives lead with 58% in Alberta, while the Liberals are down five to 22%. 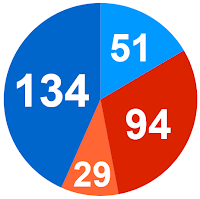 The Conservatives win 65 seats in the West and North, 60 in Ontario, seven in Atlantic Canada, and two in Quebec for a total of 134. The big result in Ontario is what keeps the Tories in power.

The NDP wins 12 seats in the West, 11 in Ontario, five in Atlantic Canada, and one in Quebec for a total of 29.

Something for everyone in this poll - even the NDP can be pleased with their result in the Prairies.

Nothing much else to say about this poll, as it neither confirms nor disproves any of the current polling "narratives".
Posted by Éric at 9:10:00 PM