After the resignation of cabinet minister Jacques Dupuis, the Liberal government in Quebec called a snap by-election for the riding of St-Laurent in central Montreal. Jean Charest chose Jean-Marc Fournier, a former minister and member of Michael Ignatieff's team, to defend the colours of the Liberal Party (PLQ). Charest was so confident that Fournier would win, that he was named a cabinet minister before he was even elected.

No one expected the Liberals to be defeated in this riding. It is a Liberal stronghold and voted 82% against independence in 1995. But the Charest government is incredibly unpopular and has been wracked by scandal. Even the Montreal Gazette, a federalist and Liberal-friendly paper if there ever was one, urged its readers to vote against the Liberals and send a message that they would not be taken for granted. In a funny editorial, the Gazette endorsed Jose Fiorilo of the Action Démocratique du Québec (ADQ) because he wasn't a Liberal.

Nevertheless, anything but a Liberal victory would have been shocking. What I was interested to see was how the participation would look and whether the PLQ vote would dip significantly. The endorsement of the ADQ candidate also piqued my curiosity.

In the end, the Liberals did win but saw their vote drop by more than 10-points. It was their lowest level of support since 1988, when the Equality Party took about 1/4th of the vote. Participation was very low - about 22%. That's low even for a by-election. 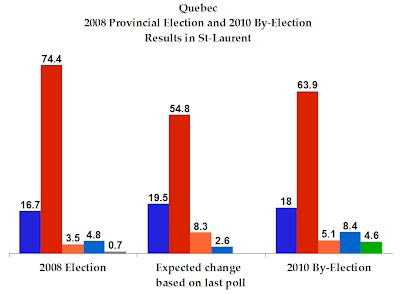 From 74.4% in 2008 the Liberals dropped to 63.9%, or 10.5 points and almost 14% of their vote. So clearly the present state of the Liberal ship is in some disarray, though the party did not dip as far as 54.8%, which is what their expected result would have been based on Léger Marketing's most recent provincial poll.

The Parti Québécois, represented by Philippe Leclerc, saw their vote increase only slightly, from 16.7% to 18%. However, that was their best result since 1988. According to the gains the PQ has made in that last Léger poll, we could have expected them to garner 19.5% of the vote. So while it is a very small moral victory, it isn't all that significant.

The endorsement of the Gazette did seem to benefit the ADQ, as they went from 4.8% to 8.4% of the vote. With their low level of provincial support at the moment, we would've expected them to be at 2.6%. So clearly more than a few people in St-Laurent listened to the editorial's endorsement. The ADQ was still below their 2007 level of support in this riding, however.

Fourth place went to the Québec Solidaire candidate Marie Josèphe Pigeon, with 5.1%. While an increase on 2008's 3.5%, it was well below the expected 8.3%. But a good result for the party.

Finally, the Parti Vert took 4.6% of the vote, a decent showing considering they didn't run a candidate here in 2008. However, it was below their 2007 level of support here so it isn't a terrific result for the party.

So, this by-election result was no surprise, but it does serve to confirm the relative weakness of the Liberal Party in Quebec right now.
Posted by Éric at 11:09:00 AM