Nothing much to report on today's Telegraph Journal/CRA poll. There has been no change in voting intentions since yesterday. 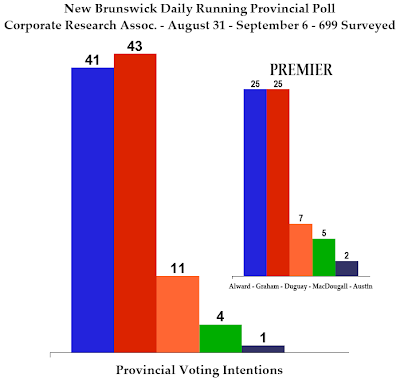 So that means the Liberals are holding at 43% with the Progressive Conservatives close behind at 41%. The New Democrats are at 11%, the Greens are at 4%, and the People's Alliance is at 1%.

Where there has been a little change was in the "Best Premier" numbers. There, Shawn Graham has dropped one to 25% while Alward is up one to 25%. This bodes well for the Progressive Conservatives, and I wouldn't be surprised to see them up a point in tomorrow's poll.

Friday should have a new projection as the poll will have seven wholly different days of polling than CRA's first poll of the campaign.

Obviously, without any change in the numbers there has been no change in the one-poll seat projection: Liberals 29, Progressive Conservatives 25, and New Democrats 1. 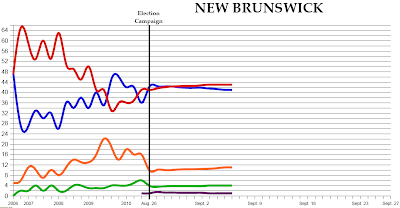