So, tomorrow is the big day, and if the count is right the long-run registry will still be alive on Thursday - but it will come down to the wire and a handful of votes. The Conservatives are using the issue to hit the NDP over the head for their "flip-flopping" on the registry. It's considered to be a good financing tool and a way to rev-up the base, and some pundits have claimed that having the LGR still around is good for the Conservative Party's electoral chances, particularly as it appears to have weakened the NDP. But are there new votes to get on this issue?

Two polls have come out recently that look at how Canadians feel about the long-gun registry. One is by Angus-Reid and the other is by Harris-Decima. They have very come up with different results, as Angus-Reid has found that 46% of Canadians support scrapping the registry, compared to 40% who oppose scraping it. They also found that while urban Canadians are more likely to want to keep the registry around, still 36% of rural Canadians felt it shouldn't be scrapped.

But then Harris-Decima comes along today, finding that only 38% of Canadians think scrapping the registry is a good idea, compared to 48% who think it is a bad idea. Interestingly, Harris-Decima found that 58% of Conservatives supporters are against the long-gun registry. For the NDP, the party particularly targeted on the issue, only 29% of their supporters are in favour of abolishing the registry.

So it is pretty difficult to reconcile these two polls. They ask slightly different questions, so the difference might lie in there somewhere. But if we average these two out, we get 42% for scrapping and 44% against scrapping. In other words, the country is split.

And the Conservatives are trying to exploit that split. Is that a good idea? The following chart compares Conservative support in 2008 and in the current projection (not the one at the top of the page, the one in my own model with all the latest polls) with support for abolishing the registry in both the Harris-Decima and Angus-Reid polls. 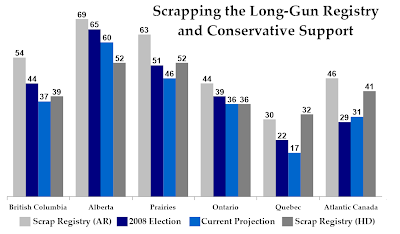 As you can see, if we listen to Angus-Reid there are a lot of votes the Conservatives can get on this issue. If we listen to Harris-Decima, there aren't as many.

Out West, this is definitely a vote getter, particularly in the Prairies where both the AR and HD polls show higher support for abolishing the registry than the Conservatives received votes in 2008. But, the party is already almost maxed out in Saskatchewan and Manitoba.

In British Columbia, where there is room for some growth, AR tells us that the Conservatives have much to gain - as much 10 points more than in 2008 and 17 points more than their current level of support in the province. But HD tells us that those people are are currently telling people they will support the Tories are almost equal in number to those who want the registry scrapped. This is the province with the most troublesome variance, and also the only real battleground west of Ontario.

In Alberta, the party is maxed out and won't lose any seats because of the registry, even if only 52% of Albertans want it scrapped (according to HD). If 69% of it want it scrapped, as AR argues, then the Conservatives have some room for growth but only one Edmonton seat out of their current clutches.

In Quebec, it seems clear that about 30% are for abolishing the registry, lower than anywhere else in the country. While that would be a stellar score for the Conservatives, it seems unlikely that, based on Quebec's electoral history, this will be a factor driving many Quebecers to the Tory blue.

It gets far more interesting for the Conservatives in Atlantic Canada, where about 44% are for abolishing the registry. That is far greater than the 29% the party had here in 2008 and the 31% they are currently getting in the polls. There is a chance that the party has some room for growth here because of the registry - but if a lot of this support is coming in the rural parts of New Brunswick and Nova Scotia, where the Conservatives are already strong, or in Newfoundland where the mood of Danny Williams can change an election, the prospects for Conservative growth become slim.

Clearly, while the registry can be a vote winner out West and potentially in Atlantic Canada, there isn't much room for Conservative growth. So the Tory pandering to their base on this issue will probably not provide many returns. Considering that the path to a Tory majority lies in the urban parts of the country (which AR found is split on the issue to a greater extent than rural Canadians), their hubbub over the long-gun registry is not going to do them many favours.
Posted by Éric at 4:31:00 PM