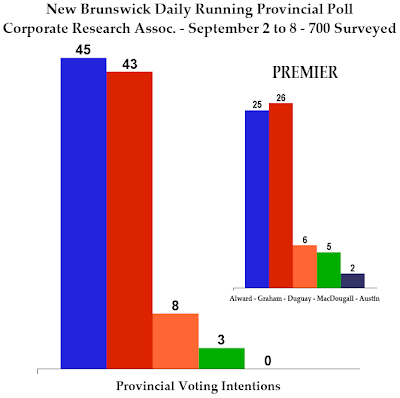 Of course we can't know the permutations of how voters switch allegiances, but what we have here is a two point gain for the Progressive Conservatives and a three point loss for the NDP. That means the PCs are now in the lead with 45% while the Liberals are unchanged at 43% and the NDP is down to 8%.

This marks a gain of four points in the last two days for the Progressive Conservatives.

The Greens are stuck at 3% while the People's Alliance is still at 0%.

The Premier numbers, however, don't exactly jive with the voting intention numbers. Shawn Graham is actually up a point to 26%, while David Alward is unchanged at 25%. Roger Duguay is down two to 6% while Jack MacDougall and Kris Austin are steady at 5% and 2%, respectively. 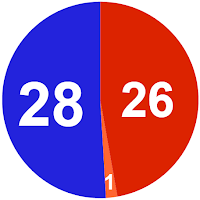 In terms of the ThreeHundredEight.com projection, the gap is narrowing between the Liberals and the Progressive Conservatives. Shawn Graham is still in front with 42.3%, up 0.2 points from the last projection update on September 4. They are holding steady at 28 seats, the bare minimum for a majority in the New Brunswick legislature.

The Progressive Conservatives, however, are up big. They've gained 0.9 points and are now at 41.6% and 26 seats, up one from the last projection update. The New Democrats are down 0.9 points to 11.3% and are down to one seat.

This is a ludicrously close election, but we may be on the brink of a shift. The Progressive Conservatives are clearly on the upswing and I expect that they will continue to make gains as their lower results at the beginning of this week of daily polling are dropped off. The question is whether we will see the NDP or the Liberals slide. Graham's party hasn't budged from 43% for days now. If the Progressive Conservatives are going to make some serious gains they need to start stealing from the Liberal vote, as the NDP can only be knocked down so far. 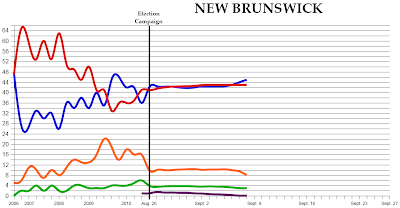 And a big thanks to Saint John Shawn for providing me with the polling data via the print edition of the Telegraph-Journal. Let's give him some traffic-love.
Posted by Éric at 9:49:00 AM