I've done two exercises that try to bridge the gap between that last day of polling and the day of the vote. The first takes the trend from the beginning of the campaign to September 19th, and applies it to the last eight non-polled days of the campaign. The second takes the trend over the final week of polling and applies that to the last eight days.

Is this how the vote will turn out on September 27th? It's impossible to know. As far as I am concerned my popular vote projection will be the result on Monday. But this is an interesting look at how the campaign could turn out, based on what has already happened.

We'll start with the campaign-long trend. The Progressive Conservatives started the campaign at 42%, and was last polling at 44%. That is a level of growth of 0.08 points per day. For the Liberals, they started at 41% and ended at 37%, a loss of 0.16 points per day. 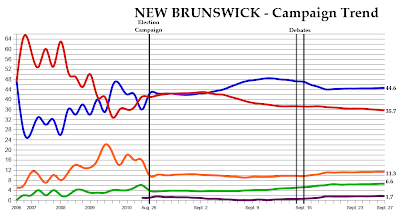 Extrapolating these rates of growth and decline over the final eight days of the campaign, we end up with 44.6% for the Progressive Conservatives, 35.7% for the Liberals, 11.3% for the New Democrats, 6.6% for the Greens, and 1.7% for the People's Alliance and independents.

That is a wide lead for the PCs, and as you will see below it creates a large David Alward majority government. 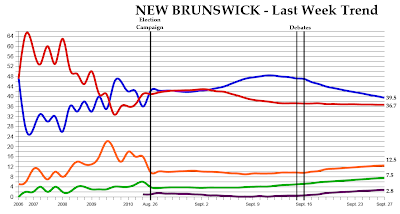 Continuing that trend over the final eight days of the campaign, the Progressive Conservatives still end up on top but with only 39.5% of the vote. The Liberals are reduced to 36.7%, while the New Democrats rise to 12.5%. The Greens take 7.5% and the People's Alliance and independents take the last 2.8%.

This demonstrates pretty well how the campaign has played out. Overall, it has been about PC growth and Liberal decline, but the second-half of the campaign has seen the Progressive Conservatives slipping. Which of these two narratives proves to be true will be discovered on September 27th. 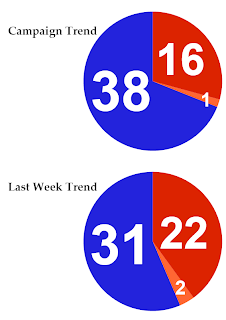 In terms of seats, both scenarios end with a Progressive Conservative majority. Using the campaign-long trend, the PCs win 38 seats while the Liberals take only 16. The New Democrats would elect one MLA.

With the trend of the last week, the Progressive Conservatives would still win 31 seats and form a majority government. The Liberals would win 22 seats and the New Democrats would win two.

Either way you slice it, the trends are positive for David Alward. While his vote seems to have been dropping of late, Shawn Graham has not been able to capitalize, and has been slowing sinking since the start of the campaign. Unless something radical has happened in this last week, or if the polls have been completely wrong, we should see a Progressive Conservative majority government elected on Monday night.
Posted by Éric at 9:34:00 AM