Harris-Decima's latest poll shows no change for the Conservatives and Liberals since August, but a drop in support for the New Democrats. The pollster suggests that this is related to the long-gun registry and Jack Layton's reluctance to whip his caucus, and they have some proof to back that up. 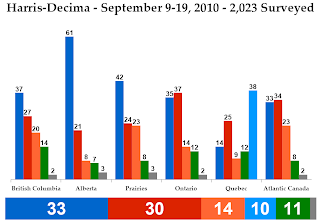 But first, the raw numbers. The Conservatives and Liberals are unchanged at 33% and 30%, respectively. It's a close race, made closer by the margin of error (though the gap is larger than the MOE). The New Democrats are down two points, however, to only 14% - a very low number for them.

As to the long-gun registry, the NDP vote seems to have slipped mostly among women and urban voters, exactly who you would expect to be upset with the NDP's fence-sitting position on this issue. And to provide some context as to how bad this 14% is, this is the lowest national number the NDP currently has in my projection.

The Liberals are leading in Ontario with 37%, up one from August. The Conservatives are unchanged at 35%, but the NDP is down four big points to 14%. The Greens are up two to 12%. The race is a close one in Ontario, but any lead for the Liberals is certainly good news. If we buy that the NDP is hurting because of the registry, we can expect the Liberals to be benefiting.

The Bloc is up one in Quebec and leads with 38%, followed by the Liberals at 25% (up three). The Conservatives are down one to 14%, indicating that perhaps the arena-funding in Quebec City is not all that it is cracked up to be in the polls. The NDP is unchanged at 9% in the province.

In British Columbia, the Conservatives are up five points to 37%, followed by the Liberals at 27% (up six). The NDP have taken a huge step backwards on the West Coast, dropping 10 points to 20%. In a smaller poll a drop like that might be suspicious, but recall that Harris-Decima polled more than 2,000 people nationally.

The Liberals are down 11 points in Atlantic Canada but still lead with 34%. The Conservatives are up five to 33%, while the NDP is up the same amount to 23%.

The Conservatives lead in Alberta with 61%, followed by the Liberals at a very good 21%.

In the Prairies, the Conservatives lead with 42% while the Liberals and NDP are deadlocked with 24% and 23%, respectively. 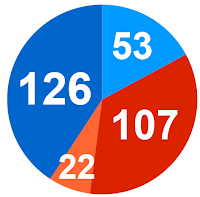 With this poll, the Conservatives would win 68 seats in the West and North, 43 in Ontario, 10 in Atlantic Canada, and five in Quebec for a total of 126.

The NDP is hit hard in this poll, and would win only 12 seats in Ontario, six in the West, and four in Atlantic Canada for a total of 22.

If this poll is to be believed, the long-gun registry may be just the thing the Liberals need to separate themselves from the NDP as an alternative to the Conservative government. The Liberals are clearly benefiting in Ontario and British Columbia, two regions that are integral to their electoral hopes. The Conservatives don't seem to be the beneficiary directly, however, though they might certainly benefit from vote splitting at the riding level.

This new storyline in the polls needs to be borne out by a few others before we can definitively say that the optics have hurt the NDP. In all likelihood, Jack Layton's efforts will prove to be successful and the registry will survive for the time being. But being exposed as a social democratic party with some less than progressive policy positions will hurt the party no matter what happens at the vote tomorrow.
Posted by Éric at 11:31:00 AM