Time to look at August's polling. Ten national polls were released during this month (four more than last month), totaling about 19,290 interviews. Here are the results we get at the national level, with the difference from last month's average in brackets.

This Conservative drop is almost equal to the 0.9 points the party gained in July. The Liberals, however, are up 1.3 points in the last two months. For their part, the NDP is down a full point. The Green gain comes after dropping 0.9 points in July. 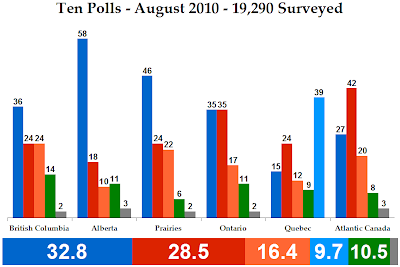 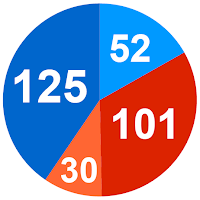 The Conservatives drop, while the Liberals have gained 10 seats in the last two months. The Bloc is steady while the NDP has dropped five seats in two months.

The Conservatives make a big gain after a tepid July. The Liberals have gained 2.9 points over the last two months, and with a big loss they are close to over-taking the NDP for second in the province. The Greens are up, but lost more than twice the amount in July.

The Conservatives take a little step back, at our still doing fine. The Liberals have lost the gains that they made in July. The NDP is done again, moving further away from re-electing their MP in Edmonton-Strathcona.

The Conservatives hold steady, while the Liberals have gained more than three points in the last two months. The NDP is also up, while the Greens are way down.

The Conservatives take 67 in the West (up one from June), while the Liberals win 18 in the West and North (up three) and the NDP wins 10 (down four).

The Conservatives drop as much as they gained in July, while the Liberals gain as much as they dropped last month. The result is close race. The NDP also have the same thing happen to them, with a loss equal to July's gain.

The Bloc is down, for the second straight month. The Liberals make another modest gain, and are now up two points over the last two months. The Conservatives are down to a dangerous level, while the NDP is down again this month.

The Bloc takes 52 seats (unchanged), the Liberals take 16 (up one), the Conservatives take 5 (down one) and the NDP win 2 (unchanged). 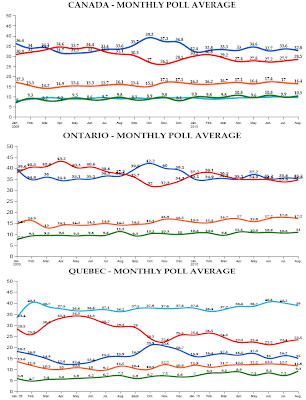 The party that performed worst this month is the Conservative Party. Their net loss (total gains/losses in all six regions) was 5.4 points. Their loss in Atlantic Canada was huge, and they are also down significantly in Quebec and Alberta. Their drop in Ontario is troublesome as the Liberals are on the upswing, while a gain in British Columbia is the only silver lining this month.

Next worst was the NDP, with a net loss of 2.3 points. They did make gains in Atlantic Canada and the Prairies, too traditionally favourable regions the party needs to do better in, but the losses in Quebec, Alberta, Ontario, and especially British Columbia hurt them. They're down three seats, which is big for a party with a small caucus.

The middle spot goes to the Bloc Québécois. They dropped 1.2 points in Quebec but did not lose any seats. They still hold a significant lead over the Liberals, but any higher and the Liberals will start to eat into the Bloc's seats.

Silver goes to the Greens, who had a net gain of 1.6 points. The two province they have a chance of electing an MP in, Ontario and British Columbia, saw modest gains, so that is good news.

August's winner is the Liberal Party, with a net gain of 6.5 points. They were up big in Atlantic Canada and the Prairies, and made significant gains in Quebec, Ontario, and British Columbia. All good news. Their only loss was in Alberta, where they don't have much of a chance of winning a seat anyway.

The summer has been good for the Liberals, who have gained 10 seats and 1.3 points in July and August. It has been bad for the Conservatives, who now can be outvoted by the combined total of the Liberals and New Democrats. It sets up an important fall season.
Posted by Éric at 1:29:00 PM