PQ and BQ comfortably ahead in Quebec 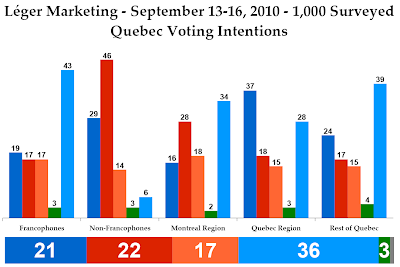 Compared to Léger's last poll taken in mid-August, the Bloc Québécois has lost one point but still leads with 36%. The Liberals are down two to 22% while the Conservatives are up two to 21%.

The New Democrats have gained four points and now stand at 17%, compared to 3% for the Greens (down four).

The Bloc's losses came primarily among non-francophones and in the parts of Quebec outside of the two largest cities. They still lead among francophones with 43% (down one), in Montreal (34%), and in the rest of Quebec (39%, down four).

The Liberals were stagnant everywhere in the province, and are only supported by 17% of francophone Quebecers. They still have the support of 46% of non-francophones and are running second in Montreal (28%). They've lost three points in the rest of Quebec and stand at 17% there.

The Conservatives made gains, particularly among non-francophones, where they are up nine points to 29%. They also lead in Quebec City with 37% (up four) and have gained seven points in the rest of Quebec (24%). They are running second among francophones with 19% (up one).

The NDP is up three points among both francophones and non-francophones, with 17% and 14%, respectively. They've jumped five points in Montreal and are at 18%, but are well behind in Quebec City and the rest of the province.

In terms of in who Quebecers place their confidence, Gilles Duceppe leads with 27%. Jack Layton follows with 24%, while Stephen Harper (17%) and Michael Ignatieff (10%) are well behind. Out of those who did not respond with "none of the above" or "I don't know", Gilles Duceppe has the support 34% while Layton is at 30%. Harper (21%) and Ignatieff (13%) are not nearly as popular. This shows, however, that there is room for growth for the NDP and that Michael Ignatieff is still not nearly as popular as his own party in the province. 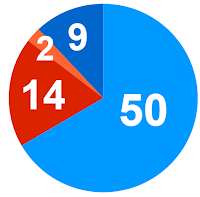 This poll would give the Bloc 50 seats in Quebec, compared to 14 for the Liberals, nine for the Conservatives, and two for the NDP. In other words, not all that different from what the situation is in Quebec right now.

As for the provincial poll, the gap between the Parti Québécois and the Liberals (PLQ) has shrunk to eight points, but the changes since August are well within the margin of error. 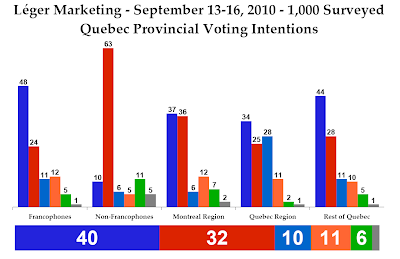 In third place is Québec Solidaire with 11%, up two. That is a very high mark for the party, and it is interesting to note that 51% of Quebecers support sovereigntist parties, though of course QS is seen as more of a social democratic (veering towards socialist) party.

The Action Démocratique du Québec is up one to 10% while the Greens (PVQ) are down one to 6%. They currently don't have a leader as Guy Rainville has decided to step down.

The PQ's losses came primarily among francophones (down three to 48%) and in the rest of Quebec (down four to 44%), groups that overlap. They are leading in Montreal (37%) and Quebec City (34%), however, which is very good news for the party.

The PLQ is up and down throughout the province, gaining three points among francophones (24%) but losing three among non-francophones (63%). They are up in the rest of Quebec to 28% (up three) but down three in Quebec City (25%). They are close behind in Montreal with 36%.

The ADQ was stable throughout the province except in Quebec City, where they are up five to 28% and within striking distance of the PQ. That is, really, the only good news for the party.

Pauline Marois is considered the best leader for premier, with 22% (up two). Jean Charest is up one to 19% while Amir Khadir (QS) and Gérard Deltell (ADQ) are down one each to 11% and 7%, respectively. Taking out the very large "none of the above" portion, Marois is bumped up to 36% while Charest would be at 31%. 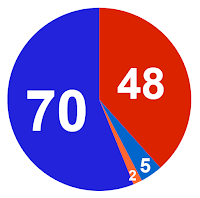 This poll would give the PQ a majority with 70 seats, against a Liberal opposition of 48 seats. The ADQ would elect five MNAs while QS would elect two.

Anything to take from this poll? More or less it is the status quo in the province, though there is some good news for the Conservatives - relatively speaking. A couple polls have put them back up to their 2008 levels of support which, considering how the last two years have gone for the party in Quebec, is very good news for Stephen Harper.
Posted by Éric at 1:43:00 PM