Ipsos-Reid has a new poll out, showing very little change at the national level from their last poll, taken between August 4th and August 9th. But the regionals tell a very different story that actual goes along with some of the political narrative we've seen lately. 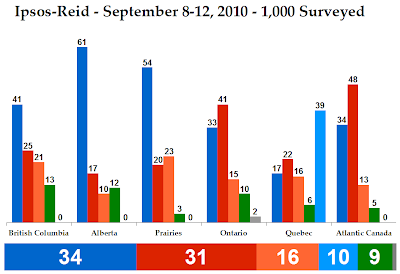 Both the Conservatives and Liberals have held steady, at 34% and 31% respectively. The New Democrats are up one to 16%, as is the Bloc Québécois at 10%.

The Greens hold firm at 9%.

But when we get down to the regional level we see that the Conservatives have made gains in the West while losing ground in Ontario. The Liberals, on the other hand, are up big in Ontario (and Atlantic Canada) and down in the West. Could this be a long gun registry thing?

Let's start in Ontario, where the Liberals lead with 41%. That is up six points from early August, and is a huge number for them. The Conservatives are down three to 33% (bad) while the NDP is down one to 15% (also bad). The Greens have dropped one to 10% in the province.

The Tories have gained three in British Columbia and are at 41%. The Liberals follow with 25% (down eight) while the NDP is up one to 21%. The Greens are up five to 13%.

The Liberals lead in Atlantic Canada with 48%, up six. The Conservatives are up six to 34% and the NDP is down eight to a miniscule 13%.

In Alberta, the Conservatives lead the Liberals 61% to 17%. 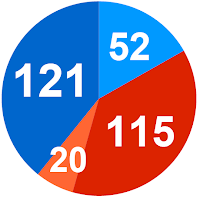 The Conservatives win big in the West and North, taking 74 seats. The also win 32 in Ontario, eight in Atlantic Canada, and seven in Quebec for a total of 121.

The NDP has a wretched time of it and wins only 12 seats in Ontario, six in the West, and two in Quebec for a total of 20.

While, of course, any poll with a lead is a good one for the Conservatives, their result in Ontario is very problematic. It's a good poll for the Liberals, on the other hand, though they need to be up a bit more in Quebec.

It is a very bad poll for the NDP. Usually the party can still take around 30 seats even at 15% nationally, but this 16% is spread out in the worst possible way. A lot of it is wasted in Quebec, and the party is shut out of Atlantic Canada. They need to be doing better everywhere.

This is just another in a set of polls that shows that there is an actual race between the Tories and the Grits, though Stephen Harper still has the advantage. It makes for an interesting fall political season.
Posted by Éric at 4:58:00 PM