We are blessed today to have two New Brunswick polls from two different polling firms. We've heard of Abacus Data before when that poll of francophone New Brunswick was released, but this is the first province-wide poll we've seen from them. It adds another data point to the projection and gives us something that helps us to confirm, or refute, the daily polling of the Corporate Research Associates.

We'll start with the latter's poll, which shows a widening gap between the Progressive Conservatives and the Liberals. 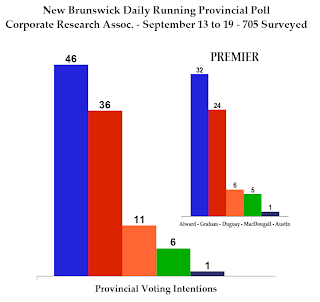 The Progressive Conservatives have gained one point and now stand at 46%. The Liberals are down one point to 36%, their lowest number in the campaign so far. The New Democrats are up one to 11%, their highest number but one they've been at before.

The Greens and People's Alliance are unchanged at 6% and 1%, respectively.

The number of undecideds continues to reduce, and is now at 20% of the electorate.

David Alward has reached his own personal high, with 32% of New Brunswickers saying he is the best man for the premiership. That's up three points from yesterday, and represents about 47% of decideds. Shawn Graham, meanwhile, is down two points to 24%, or 35% of decideds.

Roger Duguay is at 6%, up one, while Jack MacDougall is at 5%, also up one. Kris Austin is unchanged at 1%.

Now the poll from Abacus, which shows the race as being far closer than what CRA has found recently. 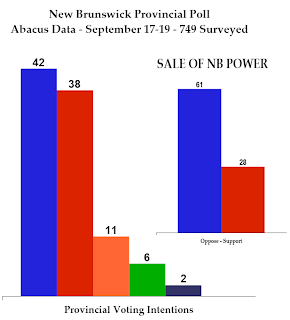 However, this poll still confirms some of what we've seen elsewhere, and with the margin of error we're talking about the same result. That's good, as we had no way of verifying CRA's polling.

Abacus has the Progressive Conservatives at 42%, four points ahead of the Liberals at 38%. The New Democrats are at 11%, while the Greens are at 6% and the People's Alliance is at 2%. Abacus found that 17% of the electorate is undecided.

This poll also looked at the opinions of New Brunswickers on Shawn Graham's now abandoned idea of selling NB Power. Fully 61% disagreed (either somewhat or strongly) with the decision, compared to only 28% who agreed. Abacus also looked at whether this was a factor in their decision on how they would vote, and it was for about a third of New Brunswickers. So, undoubtedly it is one of the things driving the Liberal struggle.

In terms of seats, the CRA poll would give the Progressive Conservatives 38, the Liberals 16, and the New Democrats one. A solid, comfortable majority - which is also the result that would come from the Abacus poll: 32 PC seats, 22 Liberal seats, and one New Democrat. Though Abacus has a closer race, in either case the Progressive Conservatives are still in a good spot.

As for the projection, I have given Abacus Data an accuracy weight of 0.50, as they are a new pollster (CRA has a weight of 1.21). After the New Brunswick election, I will be able to give them a rating based on how close they end up calling the vote.

With the addition of these two polls, the Progressive Conservatives gain a seat and are now at 32. The Liberals lose a seat and are down to 22, while the New Democrats remain at one MLA.

Without another poll from Abacus to determine a trend, we can't say that the Abacus poll refutes the findings from CRA, who show a significant lead for the PCs and one that is relatively stable. Abacus shows a lead outside of the MOE for David Alward, but a closer race. What Abacus does confirm is the level of support for the second and third tier parties and that the Liberals are well below where they need to be to avoid being the province's first one-term government.
Posted by Éric at 9:56:00 AM