As I've pointed out on several occasions, a full week has passed since the last days of polling. Tomorrow is voting day in New Brunswick - so how can we make an attempt at estimating voting behaviour when almost the last 1/4th of the campaign has not had any polling?

This is not the first time something like this has happened in New Brunswick. Corporate Research Associates has a policy of not polling in the last week of a campaign, and that policy still existed in 2006.

In that last CRA poll during the 2006 campaign, the Progressive Conservatives were at 42%. The Liberals were at 44% and the New Democrats were at 10%.

Was that a polling error, or the permutations of the final stages of a campaign? The likely answer is a bit of both.

To determine how people will vote tomorrow, based on the last available CRA poll, we could apply the same adjustment that took place during the 2006 campaign. Of course, that campaign had its own issues and flashpoints, and using the 2006 campaign as our only point of data limits the predictive capability of this exercise. In truth, I'd consider that capability to be almost zero. But it is a fun little exercise nevertheless, and gives us a little preview of what could happen tomorrow. 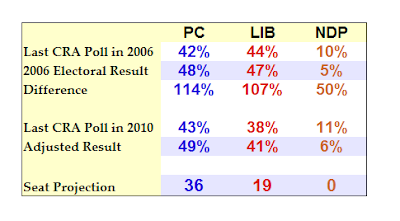 The last CRA poll in this campaign (the one I reported on a few days ago encompassing data from both the TJ and CBC polls) had the Progressive Conservatives at 43%, the Liberals at 38%, and the New Democrats at 11%.

Applying the same level of adjustment that took place in 2006, we end up with 49% for the Progressive Conservatives, 41% for the Liberals, and 6% for the New Democrats. Those are convenient numbers, as they leave four percentage points that we can distribute comfortably to the Greens and People's Alliance.

With those levels of support, I project that David Alward's party would win 36 seats and form a majority government. The Liberals would win 19 seats and the New Democrats would win none.

But, again, I ask you to take these numbers with a massive grain of salt. It is much more likely than not that the changes in support in the last week of the campaign will come about differently than they did four years ago.
Posted by Éric at 9:40:00 AM