Angus-Reid's latest provincial poll in Quebec shows the Liberals have dropped significantly, opening up a 14-point gap between them and the Parti Québécois. 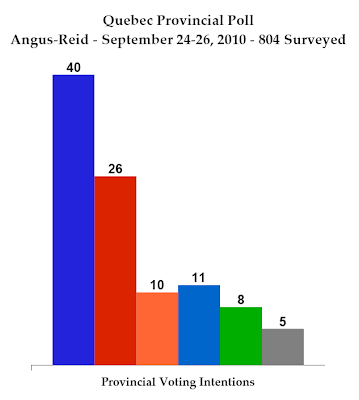 Compared to Angus-Reid's last poll in August, the Liberals have lost five points and now stand at 26%. The PQ leads with 40%, up one.

The Action Démocratique du Québec is third with 11% (down one) while Québec Solidaire is up two points to 10%. The Greens are at 8%, unchanged, while "others" are up two points to 5%. I imagine that a lot of disgusted Liberal voters are parking their votes there. 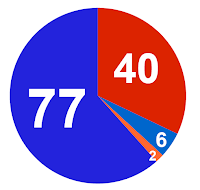 With the results of this poll, the Parti Québécois would win 77 seats and form a solid majority government. The Liberals would be reduced to 40 seats, their lowest result since the 1976 election that first brought the PQ to power. The ADQ would win six seats and QS would win two.

There is a lot of bad news in this poll for Jean Charest. Only 17% of Quebecers believe him over Marc Bellemare, the former justice minister who is accusing the premier of meddling in the nomination of judges. A majority, 51%, believe Bellemare while 24% believe neither. And since more people are following the Bastarache inquiry than the Montreal Canadiens or the war in Afghanistan, it just stinks for Charest, no matter how you slice it.

Angus-Reid also asks who would be a good person to replace Jean Charest if he stepped down as leader of the Liberals. Opinion is split and "none of the above" or "don't know" are more popular options than any of the individuals listed by Angus-Reid, but Denis Coderre, current federal Liberal MP, is on top with 13%. He is followed by former federal minister and current TV pundit Jean Lapierre at 9% and current provincial minister Nathalie Normandeau with 7%.

Though Pauline Marois' leadership is in no way challenged, the same question was asked about the PQ. Gilles Duceppe finished on top with 19%, but considering his age it is unlikely he will ever become leader of the PQ. Lucien Bouchard, who is even older, garnered 11% support. François Legault, a former PQ MNA, was at 9%. It is interesting to note that both Bouchard and Legault are considered to be on the right-hand side of the political spectrum.

It just keeps getting worse and worse for Jean Charest, both in the inquiry and in the court of public opinion. Yet it needs to be repeated again and again: the next election is three years away.
Posted by Éric at 1:49:00 PM