NB gap down to 10 points

Today's TJ/CRA poll indicates that the debates which took place on Tuesday and Wednesday may have had an effect on the campaign. But in the third complete poll of the election, the Progressive Conservatives are in full control. 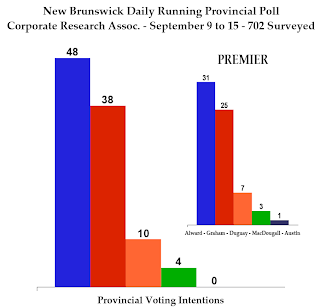 Compared to yesterday, the Progressive Conservatives are down two points to 48%. The Liberals are up one to 38% while the New Democrats are also up one to 10%.

That is, relatively speaking, a good deal of movement. It's quite possible that the debate effect was huge, and we will see this for the rest of the coming week. Or, it could be a one-off thing. We'll have to wait and see. And while the gap has been reduced to 10 points, that is still enormous.

But readers should remember that this is only the third complete poll of the campaign. If the Corporate Research Associates weren't releasing daily data, we would have only gotten new polls every Friday. In that context, this is a great poll for the PCs. They went from 36% in the month before the campaign to 42%, 45%, and now 48%. That is a steady climb, and if we didn't have the details on the party's daily results we would be talking about how Alward is safely marching towards victory.

In the context of these polls, the Liberals look stagnant. They remained at the 41% they had in August in the first week of the campaign, then went to 43% and now 38%. Statistically speaking, that is not much more than variance within the MOE.

Talking these two factors into account, the story doesn't become one of steady PC growth and Liberal fall, but a lifeless Liberal Party being overtaken by the Progressive Conservatives.

For the New Democrats, Greens, and People's Alliance, these three individual polls just show no change of any great significance.

It's important to remember these things. CRA is only polling 100 people per day, so their daily numbers aren't exactly foolproof. It is within the context of the whole seven days that their numbers become telling, and when we look at the three individual weeks of polling we see a different story than the daily horse race indicates. 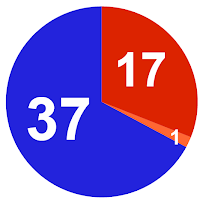 With this week of polling, the Progressive Conservatives would win 37 seats and form a majority government. The Liberals would be reduced to 17 and the NDP would win one.

While the PC haul is down five seats from what I gave them with yesterday's numbers, compared to the other two weeks of polling this is far greater than the 28 seats I gave them on September 10th. They've gone to a slim majority to a comfortable one.

There hasn't been much change from a leaders' standpoint. David Alward is still at 31%, Shawn Graham is still at 25%, and Roger Duguay is still at 7%. The only change comes from Jack MacDougall of the Greens and Kris Austin of the People's Alliance. They are each up one point to 3% and 1%, respectively. Perhaps they impressed a few people at the debate.

For the site's overall projection, this new week of polling allows me to put the September 2-8 poll back into the model, along with this September 9-15 poll. The result doesn't yield a seat change, but the Progressive Conservatives are down 0.1 points to 43.0%. The Liberals are up 0.6 points to 41.4% and the NDP is down 0.4 points to 11.0%. The Greens are down 0.1 to 3.6% and the People's Alliance and independents have also been reduced by 0.1 points, and now stand at 1.0%. 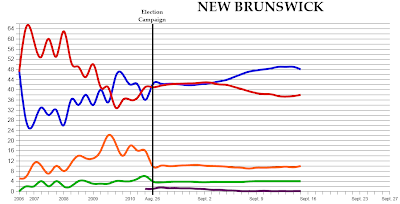