The latest TJ/CRA shows only incremental change from Saturday's poll but some interesting results over what would have been reported on Sunday if the newspaper was printed. 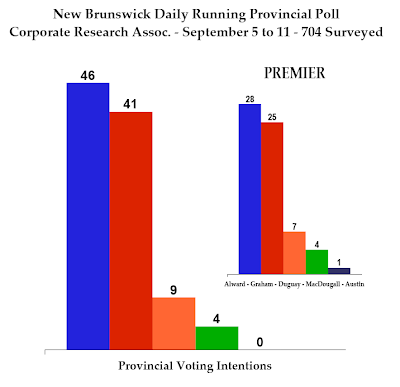 The incremental change from Saturday's poll is that the Progressive Conservatives are up one point to 46%. The Liberals, New Democrats, Greens, and People's Alliance are unchanged at 41%, 9%, 4%, and less than 1% respectively. But what is most interesting is that on the week of polling ending on September 10 the Liberals had sunk to 39% (and the PANB was up to 1%). That was a seven-point gap between the Progressive Conservatives and the Liberals.

The undecideds have been reduced to 24%. 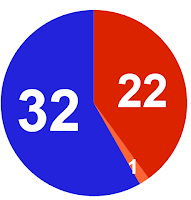 Speaking of Alward, his popularity is on the rise. He was at 25% in Saturday's poll but has risen three points to 28%. Shawn Graham is unchanged at 25% (though he did dip to 24%), as is Roger Duguay at 7%. Jack MacDougall has slipped one point to 4% and Kris Austin remains at 1%.

Removing the undecideds and none-of-the-aboves, that gives Alward 43%, or just below his party's support. Graham is at 38% while Duguay is at 11%. The NDP still has some room for growth. MacDougall would have 6% and Austin 2%.

So the race is starting to become one-sided, at least according to the Corporate Research Associates' polling. This week's debates (two in English and two in French) could either solidify Alward's lead or get Graham back into the race. Who knows, it might even push Duguay up into the double-digits again. 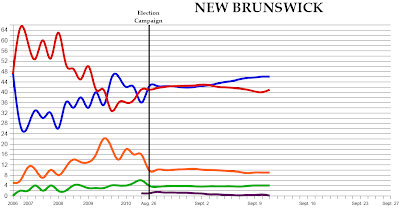