PC lead of one point holds

Thanks to a friendly Twitterer who sent me the information today, I can complete yesterday's Corporate Research Associates poll. I was hoping they would upload the information to their site quickly but that hasn't happened yet. In yesterday's poll, the Greens were at 4% and the People's Alliance was at 1%.

Corporate Research Associates the The Telegraph-Journal will be releasing daily polling data of a seven-day tracking poll. So, each day the newspaper will report on what the last seven days of polling, as CRA will be surveying 100 people each day.

How I will report this remains to be seen. The Telegraph-Journal did not put their article of today's polling online, which makes it more difficult for my when CRA doesn't upload the information on their site.

In terms of the projection model, I can't input the daily tracking poll on a daily basis. That would skew the information, since six days of the poll I input into the model yesterday is part of today's poll. What I will be doing is inputting each new seven-day poll. In other words, a new poll will be put in the system every week. If CRA ends up posting their daily results, rather than their seven-day results, I may be able to use that instead. We will have to see. 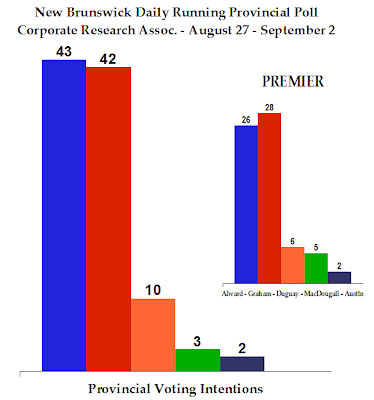 What we have today is the Liberals and Progressive Conservatives each picking up one point. They stand at 42% and 43% over the last week, respectively. The New Democrats are unchanged at 10% and the Greens have dropped one to 3%. The People's Alliance is up one to 2%.

David Alward's popularity is unchanged, at 26%. But Shawn Graham's is down one to 28%. We'll have to see if that is a trend or not. 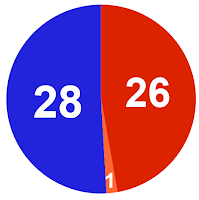 This poll would give the Progressive Conservatives 28 seats. The Liberals would win 26 and the New Democrats would win 1.

The projection has not changed, as I've explained it wouldn't, but because I now have the Green result from yesterday's poll I can report that they are at 3.6% in the projection.

I am curious to see, from a personal stand point, how this is going to play out. I hope that CRA will post their daily results on a daily basis, or that The Telegraph-Journal makes future poll articles available online. Otherwise, I would most appreciate if people helped me out the way Saint John Shawn helped me out, with pictures of the articles in question. Out here in Ottawa, the New Brunswick papers are a little hard to find. 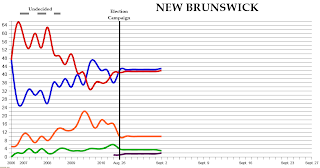