The electoral race in Fredericton, Moncton, and Saint John

Some of the most hotly contested battle grounds in New Brunswick are in the province's three main cities: Fredericton, Moncton, and Saint John. Indeed, about half of the closest races in 2006's election were in these three cities. In all they represent part or all of 19 seats in the New Brunswick legislature, or more than one third. And, of course, they are the economic powerhouses of the province.

So, let's look at how people in each of these cities have voted in the last three elections.

First, Fredericton. The provincial capital has a metropolitan population of about 86,000 people, and its limits encompass part or all of five seats. The city elected mostly Liberals in the last election, so it will be necessary for the Progressive Conservatives to snatch a seat or two away from them in order to form government. 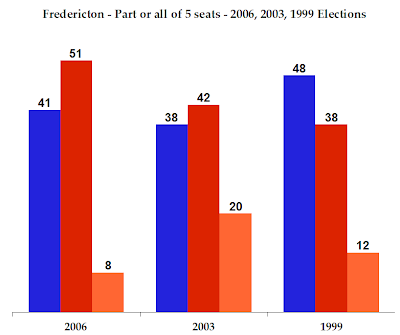 But they have a difficult test ahead of them. Over the last three elections the Liberals have been on the rise in the capital, going from 38% in 1999 to 42% in 2003 and 51% in 2006. But now that the people of Fredericton have experienced a Liberal government, will their voting behaviour change?

Next, Moncton. The biggest city in New Brunswick with a metropolitan population of about 127,000, Moncton is home to part or all of seven seats. Both Liberals and Progressive Conservatives were elected here in 2006, so it will be a battle of offense and defense for both parties. 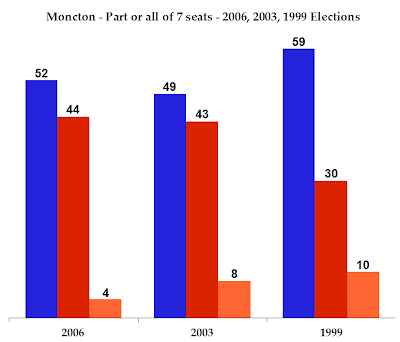 Over the last three elections, the Progressive Conservatives have held the advantage. They dominated in 1999 with 59% of the vote but lost ten points in 2003, and were almost overtaken by the Liberals. But they grew their vote to 52% in 2006 and opened up a gap of eight points over the Liberals.

The Liberals saw big gains in 2003, going from 30% to 43%. But they were stagnant in 2006 with a gain of only one point to 44%. With the NDP vote so low, they need to take support from the Tories in order to make some new gains in the city.

Finally, Saint John. Located on the Bay of Fundy, Saint John is home to about 123,000 people and all or part of seven seats. The city elected a mix of Liberals and Progressive Conservatives in 2006, and was the home of Elizabeth Weir, the long-time only NDP MLA. So it will be a battleground for all three major parties. 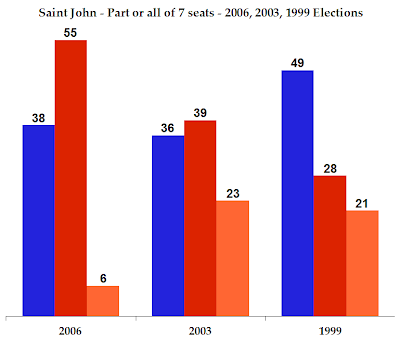 But the Liberals go in with the advantage, and the momentum. From 28% in 1999 the party went to 39% in 2003, making all of their gains at the expense of the Tories. Then, in 2006 the party took advantage of Weir's departure and rocketed up to 55% of the vote in the city.

Because of Weir's history, Saint John is the NDP's best bet for an urban seat. But they need to rebuild a lot of lost support. The party was at 21% in 1999 and 23% in 2003, but fell to only 6% in 2006 in the NDP's first Weir-less election in over a decade. Can the NDP regain some of that lost support and make a surprise upset win?