Yep, a 0.3 point gap. In other words, TIED! Finally, something interesting in this week's EKOS poll. 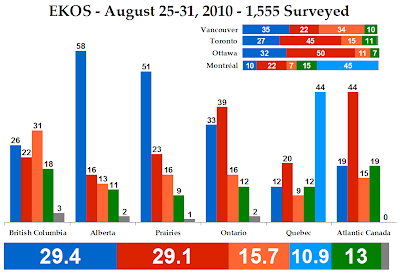 The New Democrats are also down, dropping 1.7 points from two weeks ago. They now stand at 15.7%, which is one point lower than they were one week ago.

One of the reasons for this drop off in support for the Tories could be the census issue. EKOS asked their respondents about it, and only 26% agreed that the mandatory long form was "unnecessary" and a "violation of privacy". Fully 56% said that it would lead to vital information being lost. Key is that among Conservative supporters only 33% thought that it was an unnecessary violation of privacy. Appealing to their base, it seems, wasn't a good idea.

The Conservatives lead in Alberta with 58.0%, followed by the Liberals at 15.5%.

More than a few big changes, but we are comparing polls with two weeks passing between them, and August has been relatively tumultuous. 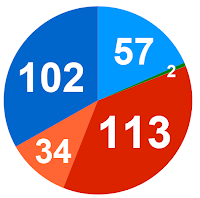 The Liberals (yes, they're first) win 59 seats in Ontario, 25 in Atlantic Canada, 15 in Quebec, and 14 in the West and North for a total of 113. Enough to form a minority, though they could've done better in the West and in Quebec.

The Conservatives win 61 seats in the West, 34 in Ontario, four in Atlantic Canada, and three in Quebec for a total of 102.

The Bloc wins 57 seats in Quebec against virtually no opposition.

The Greens win one seat in British Columbia and one in Atlantic Canada for a total of two.

It's been awhile since one of these polls has put the Liberals on top. It would be a tiny minority, requiring support from either the Bloc or the Conservatives to get legislation passed. But, a minority nevertheless.

There are a few things in this poll that tell me there are a few dangerous things in it for the Conservatives that shouldn't be chalked up to polling error. First, this is not the only poll to show little or no gap between the two parties. Second, the Liberals have a significant lead among women, which is not new. Third, the census result is not very good, especially when only 1/3 of Conservatives support it.

For the Conservatives, volatility in British Columbia, faltering in Ontario, mid-to-low teens in Quebec, and strong Liberal performances in Atlantic Canada are not unique to this poll.

Going into the fall session, the Conservatives are on the defensive. They need to avoid pushing the opposition into an election for the time-being. While they hold the advantage, the momentum is not on their side. Their one ace-in-the-hole is that the Liberals scuppered this kind of lead last year at exactly this time. It will be up to Michael Ignatieff not to do it again.
Posted by Éric at 10:29:00 AM