In other words, these projections are the best possible result each party could've gotten had an election taken place last month, based on the available polling data.

For the New Democrats, their best case scenario in August is better than that of July for two reasons: A) more seats, and B) more political clout. 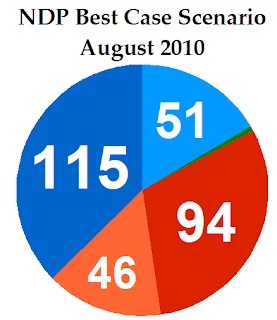 With 18.4% of the vote, the NDP would win 46 seats, a new record for the party. Almost half (20) of these seats came from Ontario, while 19 were won in West, two in Quebec, and five in Atlantic Canada.

While this is only two more seats than the party could have won in July, it is a much better situation as last month the combined totals of the Liberals and NDP did not outnumber the Conservatives. Now, with 140 seats between them, the Liberals and NDP would have the ability to cobble something together.

As for the Liberals, their best case scenario is the thing the party has been hoping for since being defeated in 2006: a return to government. 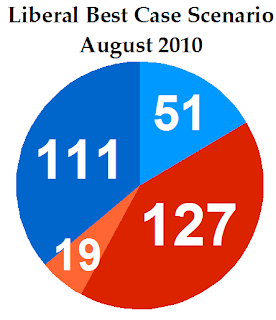 With 35.1% of the vote, the Liberals would elect 127 MPs and form a minority government. The Conservatives would elect only 111 MPs while the NDP would be reduced to 19.

The Liberals win 59 seats in Ontario, 27 in Atlantic Canada, 22 in the West and North, and 19 in Quebec. This is 15 seats better than last month.

It's generally the same size of caucus that Paul Martin won in 2004, but the problem is that the Liberals would need to rely on the support of either the Bloc Quebecois or the Conservatives to get legislation passed - something Martin had to deal with as well.

For the Tories, their best case scenario is only marginally better than July's, but more importantly does not give Stephen Harper his sought after majority. 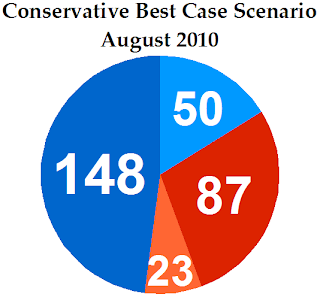 The Conservatives win 76 seats in the West and North, 55 in Ontario, nine in Atlantic Canada, and eight in Quebec. It ensures that their minority government survives for a few more sessions, but probably tests the patience of the Conservative Party for their three-time minority leader.

This month's best case scenarios show that there is still something for all of the parties to go for, but that the Conservatives are no longer dominant. An increased minority would not be a bad outcome for the Conservatives, but another minority government is not what the party is looking for. For the NDP, increasing to 46 MPs would be a great boon to the party, and being capable of forming a coalition with a plurality of seats would give them huge political clout. But as the scenarios for the other parties show, there is a risk that the NDP could be reduced to half of their current size.

Undoubtedly, this month's best case scenario is the best news for the Liberal Party. It shows that they are capable of winning a clear minority, and forming government. In prior months the Liberal best case scenario was always a tiny minority or a runner-up finish. Winning this amount of seats was good enough for Paul Martin in 2004 and Stephen Harper in 2006, so there's no reason to think it wouldn't be good enough for Michael Ignatieff in 2010 or 2011.
Posted by Éric at 2:50:00 PM